If anyone wondered whether Bill Clinton still ‘has it’, his deeply personal speech at the Democratic convention erased all doubts – and will only help his wife

Former US President Bill Clinton speaks on the second night of the Democratic national convention in Philadelphia, opening with the story of how he met his wife Hillary. Video: C-SPAN 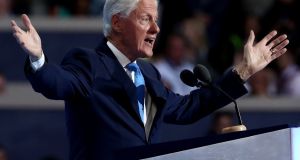 It was written in the style of classic, Southern literature, told by a 69-year-old man whose hands shook and voice quavered. All that made the narrative, about a woman who has fascinated and inspired her husband for 45 years, more riveting.

If anyone questioned whether Bill Clinton still “has it,” his tour de force speech at the Democratic convention on Tuesday night should have erased any doubts.

The former president’s address drove home the point that his wife is someone who gets things done, who makes a difference. “She is still the best darn change-maker I have ever known,” he testified, giving vivid examples like establishing the first legal aid clinic in northwest Arkansas and expanding health care to isolated areas of the state. He called her “the best mother in the world,” too. Marking the moments in her personal life that shaped her, he portrayed a warmer Hillary.

This humanized her in a way that neither the candidate nor any of her other surrogates have been able to. The speech made a powerful case for her authenticity, honesty and trustworthiness, the aspects of her character people judge her most negatively on. “She is the real one,” he said. He urged everyone to ignore what he called the “cartoon” version of her that political opponents have painted.

Without mentioning Donald Trump’s name, the speech set the Republican nominee up as the implicit fake. Without being overtly political, the personal anecdotes about Hillary Clinton’s work for women and children and her successes in changing their lives amounted to an unambiguous message. By mentioning her efforts in states ranging from Alabama to Massachusetts, he made the delegates from those states go wild on the convention floor and fired up the party’s activist base.

His fluency, and the naturalness of the stories he told, went some way towards masking the total weirdness of having him return to the White House as “First Gent” after relinquishing the presidency himself 15 years ago.

His wife’s official nomination for president came just hours before Bill Clinton took the stage. Certainly, the possible election of the first woman president is a huge historic moment. But so is a former president coming back to Washington, DC as her spouse.

That prospect gives sends shivers down the spines of some voters. Though there has been no mention of it at this convention, Donald Trump has made hay with Bill Clinton’s “scandals”, including unsupported charges that he and his wife, “Crooked Hillary” have threatened his female accusers. In Cleveland, the GOP shined a spotlight on Bill Clinton’s misconduct in office. But Americans may not be particuarly eager to revisit old Clinton messes.

The role of “First Gentleman” has yet to be defined. The campaign will remember 1992’s “two for the price of one,” slogan, which backfired when Bill Clinton first took office and Hillary’s health care plan became a debacle. Hillary Clinton has said she will solicit help from her husband in strengthening the economy, a potentially key role, but Bill Clinton claimed he would not be at Cabinet or attend crisis meetings. He’s also said he won’t be involved in the well-funded and controversial Clinton Global Initiative if his wife is elected. Is that a good thing? Pat Healy of The New York Times smartly pointed out that Bill Clinton makes mischief when he has time on his hands.

Continuing to call shots at the Clinton Foundation will surely be tempting. And Chelsea Clinton will likely continue her central role in CGI and the Foundation, leaving plenty of room for troubling conflicts of interest if donations continue to pour in from foreign sources and cronies. Eight years of a scandal-free Obama House stand in stark contrast to the Clinton’s past – and possibly future – record.

And sometimes Bill cannot help but upstage his wife simply because he is a natural born politician who thrives on feeling the love. That’s why he’s been scheduled so heavily in small, average towns and cities where he draws huge crowds but relatively little media attention. There were big Bill gaffes in 2008 when he lashed out at Obama. During the primaries, he did well at staying under the radar. But immediately after his wife sewed up the nomination, there was his exceptionally ill-timed tarmac meeting with Attorney General Loretta Lynch as she was on the cusp of issuing her decision over criminal charges in the e-mail controversy.

He made up for that damage with an exceptionally successful, memorable and moving speech in Philadelphia. He spoke eloquently and personally of having “more yesterdays than tomorrows”.

Afterwards, it was almost an anticlimax when there was live video of Hillary, in powerful red, breaking through a cracked glass ceiling and thanking the delegates. Her promise that the young girls who stayed up late to watch the convention may become future presidents was pure treacle.

It will be interesting to see how Bill Clinton’s role evolves in the general election. One friend of the husband and wife team observed on Tuesday that her gleeful appearances with her running-mate, Tim Kaine, may create the illusion that Hillary has already moved on to a second husband. Will the voters warm to him the way they warmed to this charismatic speechmaker, first in 1992 and again in 1996? It’s unlikely. But then Hillary doesn’t need another Bill – she’s already got one. For better and for worse.