Zen and the art of silencing gunfire 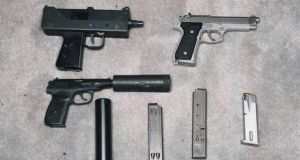 In the annals of political activism, it is often said that silence is consent. But in a city engulfed by relentless noise, silence can become the only thing capable of drowning out the constant chatter and focusing attention on what’s really important.

On April 5, Herbert Von King Park in Brooklyn’s marginalized Bed-Stuy neighbourhood was the setting for an unusual act of protest and commemoration, when a coalition of anti-violence organizations joined forces with the city’s Zen Buddhist community for a “Silent Day of Recognition” lamenting the loss of youth to gun violence in the city.

The event brought together local grassroots groups such as Divas for Social Justice, and Central Brooklyn Organizing for Action, and the Brooklyn Zen Center, where I have been a practitioner since my arrival in New York two years ago.

As we sat and listened to the names of the deceased being read out - a listing that took nearly 20 minutes to complete - the scale of this ongoing tragedy began to sink in. It was here in Von King Park, in January last year, that 2-year-old Kuadir Simon was shot when two men opened fire on his father Lorenzo. Kuadir is one of the lucky ones, however, having survived the incident. In August 2013, one-year-old Brooklyn boy Antiq Hennis was hit in the head and killed when four shots were aimed at his father in another suspected gang-related incident. And just days before that three-year-old Tharell Edward was likewise shot in the head after an argument broke out in the Brooklyn apartment where he lived.

Over the past 18 months, residents in the borough have seen several other children fall victim to gunshot wounds, in some cases fatally. Even though a long-running decline in violent crime in the city has continued, gun violence continues to take a devastating toll on New York’s poorer neighbourhoods. In one 48-hour period last summer, some 25 people were shot across the five boroughs, six of them killed.

“Even when it is a social issue like gun violence, the pain of those who have lost someone is usually suffered in isolation, and putting the weight of a shared tragedy on a few individuals only deepens the trauma,” explained Zen Priest Greg Snyder, Director of the Brooklyn Zen Center, who himself witnessed the brutal shooting of a close friend from only a few yards away. “A community coming together in silent recognition allows those grieving loved ones to feel that both the victim’s memory and the surviving grief are being held by a wider humanity that is critical to our sense of well-being.”

Silent protest has a long history in the United States, particularly among the African American community. Nearly a century ago, in 1917, some 10,000 African Americans marched in silence down Fifth Avenue after 48 people were killed and hundreds injured in St Louis when marauding gangs of whites stormed into black neigbourhoods, burning thousands of homes and stabbing and hanging local residents.

In 2006 the Reverend Al Sharpton led another silent march down Fifth Avenue after police in Queens shot and killed an unarmed African American man. More recently, the NYPD’s ‘stop and frisk’ policy, an invasive tactic of dubious efficacy that is overwhelmingly targeted at ethnic minorities, has provoked a new wave of silent rebuke, with tens of thousands marching through Manhattan again in June 2012.

The power of the silent protest is that it draws in people’s attention rather than demanding it more overtly. When people protest with placards and chanting, the focus is on the slogans, but when they protest in silence, the focus is on the people themselves. Much like the strategy of non-violence deployed by the civil rights movement in this country in the 1950s and 60s, it also has a moral authority, obliging others to recognize the solemnity and inherent dignity of the demonstrators.

A half century after Martin Luther King forced historic changes in US legislation, socio-economic outcomes among African American communities remain shockingly poor, and their exposure to more overt forms of violence is equally disproportionate. In 2010, African Americans accounted for 13 per cent of the US population, but 55 per cent of firearm homicide victims.

“There is a need for silent activism in our community today to teach our youth a clear understanding of the importance of non-violence,” said Claris James, co-founder and Director of Divas for Social Justice. “So many of them do not realize that change was made during the civil rights movement as a result of the strength it took to remain silent.”

It has been argued that an insidious if subtle racism underpins US society’s capacity to leave poorer communities undefended from both physical and economic violence. And it is for this reason that a form of protest that quietly pushes home the message of dignity and humanity is so fitting.

This coming together of New York’s Zen Buddhists and its anti-violence activists is founded in a shared belief in the transformational power of silence. What both these groups understand is that finding peace within and achieving peace without are ultimately connected. And in a ‘city that never sleeps’, or slows down for that matter, silence is sometimes the best way to make yourself heard.