Opinion: Transatlantic trade agreement would be a better focus for Irish attention 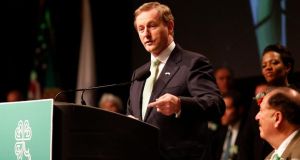 Enda Kenny’s recent visit to Washington for St Patrick’s Day was his fourth as Taoiseach. It was business as usual: he spoke about the economy, Northern Ireland and immigration. Photograph: Dominick Reuter/Reuters

When it comes to Ireland’s view of itself in the psyche of the United States, it seems we are still stuck in the 1960s, when “Irish” America reigned supreme. President Michael D Higgins visited the US midwest recently; Taoiseach Enda Kenny visited the US on St Patrick’s Day; and both spoke in favour of a solution to the problem of the estimated 50,000 undocumented Irish immigrants in the US.

The President is no stranger to the US, having graduated from Indiana University in 1967 with a master of arts degree. Mr Kenny’s visit was his fourth to Washington as Taoiseach for St Patrick ’s Day. It was business as usual: he spoke about the economy, Northern Ireland and immigration. The Americans played their part, smiling and wearing green ties – but the ties that matter frayed long ago. The reality is the US has moved on. Irish America is now mainstream and any expectation of special treatment because of the past is misplaced.

Leaving aside that this is the most do-nothing congress in recent memory, the latest exercises are at best missed opportunities and at worst a waste of time. In a deeply partisan US, that means immigration is off the table. With midterm elections in October no action will be taken that could damage an incumbent.

Why should there be an expectation that 50,000 illegal Irish immigrants in the US will be let off the hook while millions of other illegal immigrants continue to get a raw deal? No matter what the spin is, there is no Irishman in the Oval Office, and on immigration we will have to get in line like everyone else.

Voting bloc Historically, Irish America could be counted on as a strong voting bloc of the Democratic Party. The Democrats have more traditionally welcomed ethnic groups

but as the Irish prospered they moved out of their original enclaves and were assimilated into the broader voting spectrum. In 2014 an Irish-American is a lot more American than Irish.

The white Catholic vote, the best indicator of any “Irish” vote, broke for the Republican Party in the last presidential election, as it is did for the previous three election cycles. Mitt Romney got 58 per cent of their vote, mirroring the general white vote exactly.

If the presidency can be won without the support of Irish America, it does not augur well for Ireland’s influence. US policy decisions appear to match the decline in Irish- American power. Since 2012, the President has been without a neighbour in the Phoenix Park as the position of US ambassador has remained vacant. With Northern Ireland a done deal in Washington, Ireland is no longer on the White House radar.

Of course, there are 27 other EU member states competing with Ireland to get the best out of TTIP negotiations but again the Republic has some advantages. Our new US Ambassador Anne Anderson, emboldened by stints in Brussels and New York (as ambassador to the United Nations), has a unique understanding of both sides of the table. Couple that with Irishman David O’Sullivan, the incoming EU ambassador to the US, and Ireland could stand to do well in these negotiations. With 14 per cent of all US investment in the EU currently going to Ireland, the Irish voice deserves to be stronger than others as this deal is discussed.

In his speech on Capitol Hill, Mr Kenny devoted almost twice as much time to immigration as he did to TTIP. If the Republic is to see any real growth and recovery, this imbalance needs to shift. As the Taoiseach said then of TTIP: “We cannot take our eyes off the prize.” Fifty thousand undocumented Irish in the US is a real problem, but there are millions of Irish at home who should also matter.

Colm Quinn is a freelance journalist based in Washington DC