People rush to buy tickets despite only 1 in 292.2 million chance of winning 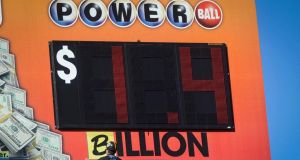 Americans rushed on Monday to buy tickets for a record $1.4 billion (€1.28 billion) Powerball jackpot, suspending disbelief despite miniscule odds that made winning more unlikely than being killed by an asteroid.

“People are buying hundreds at a time. We’ve sold more than $1,000 worth of Powerball today, and it’s still early,” said Amin Haffar, owner of a Citgo service station in Chicago suburb Oak Lawn.

Illinois is one of 44 states, plus Washington DC and two US territories, that participate in Powerball. The grand prize in Wednesday’s drawing is the world’s richest lottery jackpot that could go to a single ticketholder, and the amount will rise further before then, lottery officials said.

A $2 (€1.84) ticket has a one in 292.2 million chance of winning the grand prize, Powerball said. That compares with a one in 700,000 chance of being killed by an asteroid in a lifetime, according to astronomers at the Space Science Institute.

Peter Finn, psychology professor at Indiana University in Bloomington, said people overestimate their chances of winning, and are driven by emotion instead of logic, which helps explain the frenzy.

“In general, people do not comprehend probability very well, especially when it has to do with the probability for unlikely events,” said Prof Finn.

“When you buy the ticket, you get a little reward because you’re thinking about what it might be like.”

The Powerball pot, which has been growing since the last winner was drawn in November, is worth $868 million (€796 million) if a winner chooses an immediate cash payout instead of annual payments over 29 years, according to Multi-State Lottery Association and Texas Lottery Commission officials.

While the $1.4 billion is by far the largest ever up for grabs in North America, Spain’s December 2015 El Gordo lottery, or “the Fat One”, had a prize pool of $2.45 billion (€2.25 billion). In 2014, it was $2.7 billion (€2.48 billion). But El Gordo payouts are awarded to thousands of ticketholders while Powerball’s riches could go to a single ticketholder.

One place that maintained its cool was the White House.

“I’m not aware that the president has purchased a Powerball ticket,” White House spokesman Josh Earnest said to laughter at his daily briefing when asked how US president Barack Obama feels about the lottery as a policy issue.

“Obviously the odds are long of winning, but people can certainly make up their own minds about whether or not it’s a good way to spend their hard-earned dollars.”