US President Barack Obama said yesterday that Nigerian President Goodluck Jonathan had accepted U.S. offers for assistance in its search for the more than 200 girls kidnapped by the Boko Haram Islamist militant group. Video: Reuters 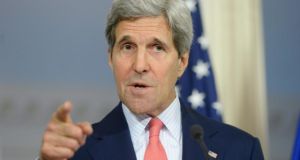 John Kerry spoke yesterday to Nigerian president Goodluck Jonathan who, said White House press secretary Jay Carney, welcomed the secretary of state’s offer to send a team to assist his government in the search for the schoolgirls . Photograph: Michael Reynolds/EPA

The United States government has said that it is preparing to send a team to help the Nigerian government find almost 300 girls kidnapped from their school by Islamic extremists last month.

White House press secretary Jay Carney told reporters that the team would likely include military and law enforcement personnel and officials with experience in intelligence, investigations and hostage negotiations but ruled out any American military troops being sent to Nigeria.

“Time is of the essence,” said Mr Carney, noting that the girls had been abducted 22 days ago. “Appropriate action must be taken to locate and to free these young women before they are trafficked or killed.”

The White House spokesman said that President Barack Obama and US secretary of state John Kerry would discuss the abductions at a meeting yesterday as 20 female US senators prepared to call on Mr Obama to condemn the kidnapping of the schoolgirls.

Mr Kerry spoke yesterday to Nigerian president Goodluck Jonathan who, Mr Carney said, welcomed the secretary of state’s offer to send a team to assist his government in the search for the schoolgirls who were abducted on April 15th by the extremist group Boko Haram.

A state department spokeswoman said that Mr Kerry and Mr Jonathan discussed the “interdisciplinary team” from the US to assist Nigeria’s government.

“It would include US military personnel, law enforcement officials with expertise in investigations and hostage negotiations as well as officials with expertise in other areas that may be helpful to the Nigerian government in its response,” she said. The state department said that the US embassy in Nigeria was preparing to set up a “co-ordination cell” to assist in the recovery of the kidnapped girls.

The American response comes amid a mounting public campaign through social media under the slogan “Bring Back Our Girls”, involving groups such as Unicef and Amnesty International, political figures such as former US secretary of state Hillary Rodham Clinton and popstars including US singer Mary J Blige and the British performer Jessie J.

Protesters, including Nigerian immigrants and American-born families, rallied outside the Nigerian embassy in Washington yesterday to demand action over the abductions.

British aid
Britain also said yesterday it was prepared to send special forces and intelligence-gathering aircraft to Nigeria to help in the hunt for the schoolgirls.

Options for British support were discussed by officials at a meeting of the government’s emergency committee, Cobra.

Yesterday UK foreign secretary William Hague said Britain was offering Nigeria assistance in recovering the girls who were being “treated as spoils of war by Boko Haram”.

Senior government officials said special forces – members of the Special Air Service or its naval equivalent, the Special Boat Service – would be deployed in Nigeria if asked to do so.

One possibility for British military involvement is that experienced UK special forces troopers would be sent out to advise Nigerian special forces.