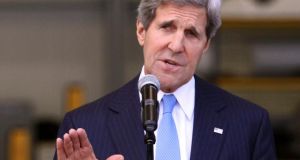 US secretary of state John Kerry’s one-day visit to Brazil will focus on restoring the trust between Washington and Brasilia that was shaken by the NSA spying disclosures. Photograph: Fredy Builes/Reuters.

US hopes of landing a coveted deal worth more than $4 billion to sell 36 fighter jets to Brazil have suffered a setback with recent revelations that the United States collected data on Brazilian internet communications.

When US secretary of state John Kerry sits down with Brazilian officials in Brasilia today to prepare a state visit to the White House by president Dilma Rousseff, the sale of the warplanes will not be on the agenda, a Brazilian source said.

“We cannot talk about the fighters now ... . You cannot give such a contract to a country that you do not trust,” a high-level Brazilian government official told Reuters on condition of anonymity because of the sensitivity of the matter.

The official said Mr Kerry’s one-day visit to Brazil will focus on restoring the trust between Washington and Brasilia that was shaken by the spying disclosures, which set off a political uproar in the South American country.

Boeing is competing with its F/A-18 Super Hornet against France’s Rafale made by Dassault Aviation and Sweden’s Gripen made by Saab to win a contract worth at least $4 billion, with probable follow-up orders that would greatly increase the value of the contract over time.

That makes it a critical prize for defence companies at a moment when the United States and many European countries are tightening military budgets.

A senior US official said Brazil’s final decision should be based on which is the superior aircraft.

“We think we have the best product,” he said of the F/A-18, adding that the United States has promised to transfer as much technology to Brazil as allowed under U.S. law regarding the fighter jet.