Rioting after black teen shot dead by police in Missouri 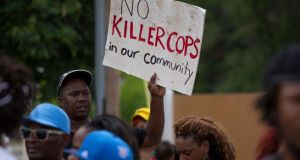 Protesters demonstrate in front of the Ferguson police headquarters after an black teenager was shot by a police officer. Photograph: New York Times

There was rioting and looting in the town of Ferguson, Missouri last night as protests over the killing of a black teenager by a police officer turned violent, police said.

Crowds broke the windows of cars and stores, set a building alight and looted shops following a day of demonstrations over the death of Michael Brown, an unarmed 18-year-old shot on Saturday by a Ferguson police officer.

There is “a lot of unrest up there, and a lot of rioting going on, and looting,” officer Brian Schellman, a spokesman for the St Louis County Police Department, said early on Monday.

He said the unrest had spread from Ferguson, a largely black St Louis suburb, to adjacent communities. About 150 officers in riot gear from throughout St. Louis County had been sent to the area.

Schellman said arrests had been made but had no details. He and three hospitals had no reports of injuries.

Police said Brown was shot after an alleged struggle over a gun in a police car. It was not immediately clear why Brown was in the car. At least one shot was fired during the struggle, and then the office fired more shots before leaving the car.

The officer, who was not identified, is a six-year veteran and has been put on administrative leave, St Louis County Police Chief Jon Belmar told a news conference.

The officer’s race has not been disclosed.

Yesterday’s protests turned violent after dark, according to news station KMOV-TV, with rioters smashing windows of stores and restaurants and damaging cars.

KMOV TV footage showed a QuikTrip convenience store set on fire after it was looted.

A teenage witness told KMOV, “They destroyed everything.”

Mobs rushed out of other stores, including an AutoZone and a Ross Dress for Less, with armfuls of stolen goods, KMOV and the St Louis Post-Dispatch newspaper reported.

Brown’s mother told TV station KSDK that her son was a “good child getting ready to go to college” and that he was visiting his grandmother when the shooting took place.

The St Louis County branch of the civil rights group NAACP has said it wants the Federal Bureau of Investigation to look into the case.

Civil rights leader the Rev Al Sharpton said in a statement Sunday that he had spoken with Brown’s grandfather and had agreed to visit St. Louis to help the family.