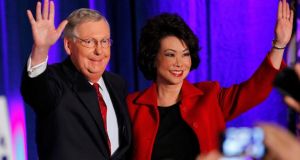 United States senator Mitch McConnell has been waiting for this moment for a long time. The Kentucky Republican is poised to become the next majority leader after surviving one of the most difficult elections of his 30-year US Senate career.

With his party set to take control of the chamber in January, the 72-year-old – who has led the Senate Republicans since 2007 – is positioned to set the legislative agenda for the final two years of US president Barack Obama’s term.

“I don’t expect the president to wake up tomorrow and view the world any differently than he did this morning,” McConnell told supporters in Louisville after winning re-election on Tuesday night. “He knows I won’t either.”

He defeated Democrat Alison Lundergan Grimes by 56 per cent to 41 per cent.

McConnell pledged to chip away at the 2010 Obamacare law; combat government efforts to curb carbon emissions; and made his quest to take over as majority leader a centrepiece of his campaign.

He had cast himself as the ultimate political insider, even though that approach ran counter to his party’s anti-Washington theme.

Then, in a late-night phone call in December 2012, the two locked down key aspects of an agreement Congress passed in a new year’s day vote. McConnell also played a major role in ending the 16-day partial government shutdown of 2013. For Democrats, he was this year’s highest-profile US Senate target. However, polls conducted in the final weeks showed him with a widening advantage in a race that until then had been neck and neck.

Part of that difference is because McConnell faced a Tea Party-backed primary challenge from Louisville businessman Matt Bevin.

In campaign events and ads McConnell sought to tie Grimes to Obama, who is unpopular in Kentucky and twice lost the state by more than 10 percentage points.

In his acceptance speech, McConnell said he and Obama had “an obligation to work together” on issues where they could agree. – (Bloomberg)