‘The gun lobby might be holding Congress hostage . . . but they cannot hold America hostage’

Barack Obama made an emotional plea today (Tuesday 5th) in defence of his plan to increase background checks for buyers of firearms over the Internet and at gun shows. Video: Reuters 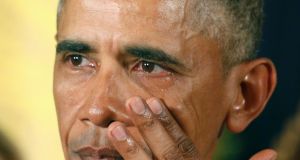 US President Barack Obama wipes away a tear while announcing steps the administration is taking to reduce gun violence while delivering a statement in the East Room of the White House. Photograph: Kevin Lamarque/Reuters

Frustrated by a divided Congress unwilling to impose tighter gun controls in the wake of mass shootings, an emotional US President Barack Obama has unveiled measures to crack down on gun violence.

In a speech at the White House, an at times tearful president set out details of plans to regulate gun sales and curtail illegal purchases.

“We do have to feel a sense of urgency about it,” said the president surrounded by victims of gun violence and their families, including Mark Barden, the father of a boy killed at Sandy Hook.

Mr Obama openly cried as he recalled the killings at the Connecticut school where 20 children were killed in December 2012.

“Every time I hear about those kids, it gets me mad,” he said.

In the absence of support for more comprehensive legislation to prevent violence that claims 30,000 lives a year, Mr Obama is pushing the limits of existing laws.

His measures have escalated the debate about the extent of presidential power and the rights of gun owners under the Second Amendment constitutional right to bear arms.

Mr Obama’s actions will make gun controls a lightning-rod issue in a presidential election year when Democrats and Republicans are sharply divided on America’s gun violence epidemic amid fears of further attacks by terrorists inspired by Islamic State militants.

His measures do not go as far as closing the “gun show loophole” that allows millions of firearms to be sold at gun shows without background checks or in online exchanges of guns.

They also stop far short of introducing universal background checks or the creation of a register for more than 300 million guns in circulation, a move that would require congressional approval.

Mr Obama’s initiative will clarify that individuals selling guns online can still be required to conduct criminal background checks on buyers, forcing people to act if they are “in the business” of selling firearms.

His administration will earmark $500 million (€466 million) to treat mental illness and direct the FBI to hire more examiners to carry out background checks on purchasers 24 hours, a day, seven days a week. Mr Obama criticised the gun lobby for blocking even moderate reforms in Washington and said that Congress “still needs to act”.

“The gun lobby might be holding Congress hostage right now, but they cannot hold America hostage,” he said.

Republicans condemned Mr Obama’s actions, attacking him for infringing the constitutional right to firearms and for exceeding his presidential authority by acting without Congress.

“The President is at a minimum subverting the legislative branch, and potentially overturning its will,” said Republican Speaker of the House of Representatives Paul Ryan.

Businessman Donald Trump, the frontrunner to be the Republican nominee in the election to decide who will replace Mr Obama, warned that his actions would be more far-reaching.

“Pretty soon you won’t be able to get guns,” he said. Mr Obama has said there are ways to reduce gun violence in line with the Second Amendment.

“This hasn’t been the first step in some slippery slope to mass confiscation,” he said. “This is not a plot to take away everybody’s guns.”

The president could see his executive actions face the same legal challenge his 2014 initiative to help illegal immigrants suffered when it was blocked by Republicans in the US courts.

The president plans to argue for support at a town hall meeting on Thursday.