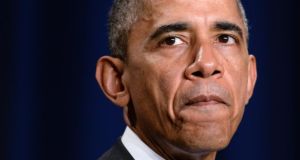 President Barack Obama said Tuesday that the Senate report on the CIA’s interrogation programme showed that he was right to formally end it when he took office nearly six years ago, but he called on the country not to “refight old arguments.”

In a written statement, Mr Obama sought to avoid alienating the CIA by praising its employees as “patriots” to whom “we owe a profound debt of gratitude” for protecting the country after the attacks of September 11th, 2001.

But he said the brutal treatment of detainees - he did not directly call it torture - wrought “significant damage to America’s standing in the world” and should never be repeated.

“The report documents a troubling programme involving enhanced interrogation techniques on terrorism suspects in secret facilities outside the United States,” Mr Obama said, “and it reinforces my long-held view that these harsh methods were not only inconsistent with our values as a nation, they did not serve our broader counterterrorism efforts or our national security interests.”

In all, 39 detainees were subjected to the techniques, including three who were waterboarded, according to a declassified executive summary of the report, produced by the Democratic-led Senate Intelligence Committee.

Mr Bush and the CIA have repeatedly asserted that the programme yielded intelligence that helped prevent attacks, but the Senate committee concluded that was not true.

The programme was wound down over the succeeding years before Mr Obama took office. No waterboarding took place after 2003 and none of the other brutal techniques were used after November 2007.

Shortly after Mr Obama became president, he signed an order that formally banned the use of waterboarding and other harsh techniques.

But he rebuffed lawmakers, advisers and supporters who wanted a broader inquiry to hold accountable those responsible for the interrogations. A Justice Department investigation wrapped up without prosecutions.

In his statement Tuesday, Mr Obama sounded somewhat sympathetic to the decisions Mr Bush and the CIA confronted in the months after the September 11 attacks, when many feared imminent terrorist attacks against the United States.

“The previous administration faced agonising choices about how to pursue al-Qaeda and prevent additional terrorist attacks against our country,” Mr Obama said. “As I have said before, our nation did many things right in those difficult years. At the same time, some of the actions that were taken were contrary to our values.”

Mr Obama went on to say that he supported releasing the declassified summary of the Senate report. “No nation is perfect,” he said. “But one of the strengths that makes America exceptional is our willingness to openly confront our past, face our imperfections, make changes and do better. Rather than another reason to refight old arguments, I hope that today’s report can help us leave these techniques where they belong - in the past.”