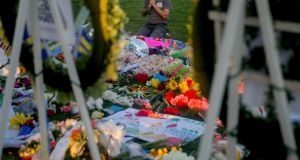 A man prays at a makeshift memorial for the Pulse nightclub victims outside the Dr Phillips Center for the Performing Arts in Orlando, Florida. Photograph: Sam Hodgson/The New York Times

President Barack Obama unleashed a stinging verbal tirade against Republican presidential candidate Donald Trump for promoting a “dangerous” mindset with anti-Islamic rhetoric in the aftermath of the worst gun massacre in modern US history.

Speaking after a meeting of his national security advisers that was dominated by mass shooting at a Florida gay nightclub early on Sunday morning, Mr Obama called out the New York billionaire over his rhetoric saying that it was harmful to national security.

“We hear language that singles out immigrants and suggests entire religious communities are complicit in violence,” he said, referring to Mr Trump’s plan to ban Muslim immigrants from the US - a proposal he reiterated following Sunday’s attack.

“Where does this stop?” said Mr Obama, pointing out that the perpetrators of domestic terror attacks in Orlando at the weekend, in San Bernardino, California last year and in Fort Hood, Texas in 2009 involved American citizens.

He challenged Mr Trump and other Republicans for claiming that his failure to use the term “radical Islam” in describing the Islamic State militant group, which control parts of Syria and Iraq, weakened the country’s military assault on the Muslim group.

He questioned whether it would “bring in more allies” or serve a military strategy.

“Calling a threat by a different name does not make it go away,” he said.

“When I am President, it will always be American first,” said the property developer.

Mr Obama used the speech to call again on the US Congress to re-introduce a lapsed ban on assault weapons in a bid to end mass shootings.

Omar Mateen (29), a security guard from Port St Lucie in Florida, killed 49 people and injured 53 at the Pulse nightclub during the three-hour attack using a high-powered AR15 military assault rifle and semi-automatic handgun. He was later killed by police.

Lateen’s wife, Noor Zahi Salman has told federal investigators that she tried to talk her husband, a New York-born Muslim-American and the son of two immigrants from Afghanistan out of carrying out the attack, NBC News reported.

Ms Salman told the FBI that she was with Mateen when he bought ammunition and a holster, it was reported, and that she once drove him to the Pulse nightclub because he wanted to scope it out. She is cooperating with investigators.

The FBI is investigating accounts of witnesses who said that Mateen visited the nightclub several times as a patron, becoming drunk, loud and belligerent on one occasion and that he reportedly used a gay dating and chat app to communicate with other men.

Mr Obama said that Mateen “appears to be an angry, disturbed, unstable young man” who became radicalised by extremist information online and pledged allegiance to IS.

Of the 44 victims first admitted to the hospital, located two blocks from the nightclub, 27 were still in its care and that six of those were “critically ill.”

“One or two of those six I would consider to be profoundly ill,” he said. “I would not be surprised if we see the death toll rise.”

Philadelphia woman Patience Carter (20), one of those injured at the nightclub, told a press conference at another hospital that Mateen spared African-Americans as she hid with two friends in a bathroom at the club.

During the stand-off, she overheard Mateen make calls to police asking that the US stop bombing his country.

“I don’t have a problem with black people,” he said to one black man, according to Carter. “This is about my country. You guys have suffered enough.”

One of her friends was killed in the attack.