Four people shot at T.I. concert at Irving Plaza in Manhattan on Wednesday 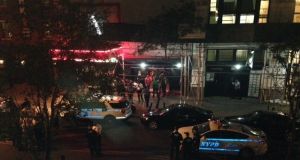 Four people were shot, one fatally, during a concert at Irving Plaza in Manhattan on Wednesday night, sending panicked concertgoers streaming for the exits, the police said.

The victims included three men, one of whom died, and one woman, a spokesman for the New York Police Department said. The rapper known as T.I. was headlining a concert at the club in the Union Square area when the shootings occurred about 10pm local time.

The motive for the shootings was unclear, and no arrests had been made late Wednesday.

“People were freaking out,” said Diana Zuluaga (40) from Manhattan, who was on the balcony and said the loud music covered the sound of the first gunshot but a second shot sent concertgoers running.

Paul Cantor (34), who was in the back of the club, said the area was filled with about 1,000 people. He said his attention was drawn to a backstage fight that spilled onto the stage and described seeing a man falling backward like a boxer who had been hit by a hard punch.

“There was a body that came across the stage, sort of with flailing arms,” he said. He said a second fight - perhaps related to the first - broke out on the club’s floor. About five seconds later, he said, he heard the shots.

Ayo Fagbemi (21), a University of Pennsylvania student, said T.I.’s DJ was playing songs to warm up the crowd. “I think T.I. was about to go on,” he said. “Right when he was about to go on, I heard two gunshots and right after there was a stampede. There were at least three rounds after, but after the second one was when people started running.”