Washington remains at standstill as cleanup begins in New York 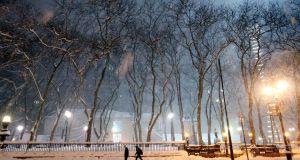 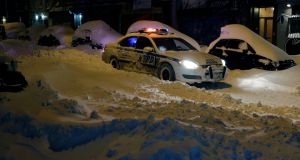 A New York City police car is seen driving past snow covered cars on the Lower East Side of Manhattan on Sunday. Photograph: Jason Szenes/EPA 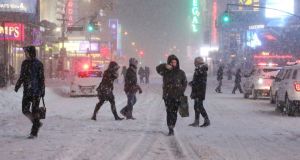 Pedestrians walk through the snowy streets near Times Square as all cars but emergency vehicles are banned from driving on the road on Saturday in New York City. Photograph: Yana Paskova/Getty Images

New York lifted a travel ban and mass transit started getting back to normal on Sunday after a record-setting blizzard in the US Northeast, but Washington remained at a standstill following storms that killed at least 19 people across the country.

The blizzard was the second-biggest snowstorm in New York City history, with 26.8 inches of snow in Central Park by midnight on Saturday, just shy of the record 26.9 inches set in 2006, the National Weather Service said.

Thirteen people were killed in weather-related car crashes in Arkansas, North Carolina, Kentucky, Ohio, Tennessee and Virginia on Saturday. One person died in Maryland and three in New York while shovelling snow. Two died of hypothermia in Virginia, officials said.

“The snow pile is going to be with us for a while, but I think we’ll be in good shape in the next 24 hours,“ he said on ABC’s This Week with George Stephanopolous.

After the storm moved out into the Atlantic Ocean, much of the Northeast was expected to see a mix of sun and clouds on Sunday with temperatures just above freezing.

New York state governor Andrew Cuomo lifted a travel ban on New York City-area roads and on Long Island at 7am (1200 GMT) on Sunday. A state of emergency declared by Mr Cuomo was still in place.

Most bus and subway services operated by the Metropolitan Transportation Authority were up and running again by 9am (1400 GMT), officials said. The agency was working on restoring full service on Sunday.

A spokeswoman for the New York Stock Exchange said the market planned to open as usual on Monday. City schools also were set to open on Monday.

The city was deploying more than 2,300 pieces of snow-clearing equipment and keeping sanitation workers on 12-hour shifts, it said.

Peter Hoeppe, head of reinsurer Munich Re’s Geo Risks research unit, said in a statement that it was too early to estimate possible losses from the storm.

Washington was a dazzling white under a bright sun, and walkers, sledders, some cars and the occasional cross-country skier were out on Sunday.

Mayor Muriel Bowser issued a call for 4,000 people to help dig the city out, above the 2,000 volunteers already signed up.

Public schools were closed on Monday across much of the Washington and Baltimore region, with some shuttered through Tuesday.

About 3,500 flights were cancelled on Sunday, and 700 were called off for Monday, according to aviation website FlightAware.com.

About 150,000 customers in North Carolina and 90,000 in New Jersey lost electricity during the storm.

More than 20,000 residential and business customers in New Jersey remained without power on Sunday, mostly along the Jersey Shore, which was hit with major flooding..

In North Carolina, about 4,000 Duke Energy customers had no power on Sunday, mostly in the eastern part of the state.

The storm developed along the Gulf Coast when warm, moist air from the Atlantic Ocean collided with cold air to form the massive winter system, meteorologists said.