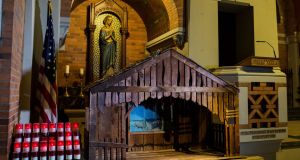 The nativity scene where a baby boy was left at the Church of the Holy Child Jesus, in the Queens borough of New York. Photograph: Kirsten Luce/The New York Times.

The mother of a baby who was left this week in a manger inside a Roman Catholic church in New York was found and will not face criminal prosecution, the county district attorney said late on Wednesday.

The baby, who was found in Queens on Monday, remained in a stable condition at Jamaica Hospital Medical Center, officials said.

Officially, the baby is in the custody of the city’s Administration for Children’s Services, as is routine in such cases.

Richard Brown, the Queens district attorney, said that his office had decided not to press charges against the woman, whom he did not identify by name, after she was located and interviewed on Wednesday.

“It appears that the mother, in this case, felt her newborn child would be found safely in the church and chose to place the baby in the manger because it was the warmest place in the church, and further she returned the following morning to make certain that the baby had been found.”

Detectives from the 102nd Precinct had been reviewing surveillance video of the woman, who, the police said, secretly left the boy in the Church of the Holy Child Jesus and disappeared.

One video clip showed the woman, with the infant, entering a dollar store on Jamaica Avenue, around the corner from the church.

Another video captured her leaving the store with the baby and newly purchased towels.

Footage from a camera at the church showed the same woman entering with the infant, the police said.

Then it showed her leaving - this time without him. It is not clear how long the baby was left alone lying atop a towel, his umbilical cord still attached.

The videos were not time-stamped, the police said. But around 1 pm, a parish maintenance worker, José Morán, returned from an hour long lunch and heard the cries of a baby in the front of the nave.

“I thought somebody was with him,” said Morán (60), who is from the Dominican Republic. “Then I decided to go look.”

He walked to the front of the nave and found the child lying in the wood-frame nativity scene, which had been newly assembled but was still empty of all the animals and statues.

The baby was partially swaddled in a towel, a corner of which was covering its face, Morán recalled.

“It was moving its legs,” he said of the boy.

Morán notified the parish office, and a staff member ran to the parish school across the street to get a nurse.

Rocio Fidalgo, a spokeswoman for the Diocese of Brooklyn, said that from time to time, people leave unwanted children at its churches, though she declined to say how often this happened.

“It’s not uncommon,” Fidalgo said. “But we feel and we believe that these mothers trust our churches in the middle of their desperation.”

A message of hope

For the parish priest, the Reverend Christopher Ryan Heanue (28), the infant’s appearance carried a message of hope. And he saw in it some divine foresight.

He had not intended for the nativity to be set up so early in the season. “That was the providential part of this,” he said Wednesday.

“The story went most certainly viral, because it’s a beautiful story,” he said.

“I pray that it’s a story that will make people appreciate the gifts of life.”

Many who heard the story already were. Parish officials said they had received well over a dozen messages in calls and emails from people around the country expressing interest in adopting the baby.

Richmond Hill has a predominantly immigrant population, with large numbers of residents from the Caribbean and South Asia, as well as sizable numbers from Latin America and elsewhere.

One of six Sunday Masses at Church of the Holy Jesus Child is said in Spanish, and one Mass a month is said in Tagalog.

Paul Cerni, the parish secretary, said that the shifts in the congregation’s demographics have vaguely mirrored those in the broader community, with a growing number of immigrants from predominantly Catholic countries of Latin America replacing those of Western European descent.

The parish, established in 1910, has a congregation that now numbers about 1,500 people, he said, with about a quarter foreign-born.

“We should pray the baby gets a proper home,” said Heanue, who arrived at the parish in February and is in charge of its day-to-day administration.

Should the baby eventually be put up for adoption, he said, he had one wish. “I would like to see the child stay in this community,” he said.