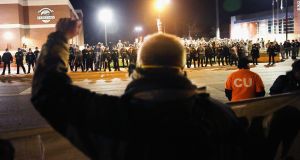 Police confront demonstrators outside the police station in Ferguson, Missouri. The area has been struggling to return to normal since the August 9th shooting of Michael Brown. Photograph: Scott Olson/Getty Images

Demonstrators shut down a shopping mall near Ferguson, Missouri, at the start of the holiday shopping season as protests over the killing of an unarmed black teen by a white police officer turned on some retailers around the country.

After a quiet Thanksgiving Day, protesters were out in force again to vent their anger at Monday’s decision by a grand jury not to indict officer Darren Wilson in the August 9th shooting death of 18-year-old Michael Brown in the St Louis suburb.

Activists around the country said they were encouraging a boycott of Black Friday sales to highlight the purchasing power of black Americans, and to draw links between economic and racial inequality.

“You have to disrupt business as usual for this to happen and that’s the only thing that’s ever made change,” said Sergio Uzurin, a protester in front of Macy’s flagship store in New York.

The killing of Brown, which has renewed a debate over race relations in the United States and the treatment of blacks and other minorities by police, has triggered months of sometimes violent protests in Ferguson and sympathy protests elsewhere.

More than 200 people in New York sought to disrupt shopping on Friday with a protest in front of the Macy’s store in Herald Square and marched into the ground floor as staff and shoppers looked on in apparent surprise.

Similar protests were staged in other cities, including Chicago, Seattle and Oakland, California, on Black Friday, when many retailers offer deep discounts and shoppers traditionally turn out in droves.

At the upmarket Galleria near St Louis, demonstrators chanted “No Black Friday” before singing carols and then briefly lying on the floor, leading officials to close the mall.

National Guard troops were posted outside, and mall security stopped anyone from entering, telling disappointed bargain-hunters the shopping center was shut for the rest of the day.

Eddie Cox, the 23-year-old assistant manager of a Lids baseball cap store, said he was proud to watch the demonstrators march past his shop.

Mr Cox, who is black, said his store was seeing only about a fifth as many Black Friday sales as last year, due to the boycott call.

“The business side of me kinda hates it, but at the same time, the young, activist, pro-conscious part of me loves every bit of this,” Mr Cox said. “It’s a really cool time to be young, black and American.”

Ferguson itself was peaceful after more than 100 arrests on Monday and Tuesday, when some demonstrators reacted to the grand jury’s decision by looting or burning businesses, and officers in riot gear fired tear gas and smoke bombs to disperse crowds.

Late on Friday, about 100 protesters marched up and down the road outside the Ferguson police department. As National Guard troops in camouflage and combat helmets looked on, the crowd chanted: “Soldiers, turn your guns around! Shoot this racist system down!”

Earlier, police had briefly reopened West Florissant Avenue, a main thoroughfare where most of the damaged or destroyed businesses are located. That allowed clean-up efforts to begin and gave residents a glimpse of more burned-out stores.

In neighboring Dellwood, the mayor called for state and federal aid for his city, where 13 businesses were burned on Monday and five were looted.

One Walmart store near Ferguson decided to cancel Black Friday sales, and merchandise was moved to other locations in the St Louis area, employees said.

In Oakland, about 16 people were arrested after chaining themselves to a train during a demonstration at a Bay Area Rapid Transit (Bart) rail station in protest, a Bart spokeswoman said.

Later in San Francisco, protesters marched through the city’s downtown, with some smashing windows at retailers in Union Square, police said.

“We just took one on the chin for Michael Brown,” said Paul Zhou, a manager at Grace Jewelers that suffered vandalism.

Images broadcast by local television station ABC7 showed hundreds of demonstrators marching through the middle of a main city thoroughfare. Police said there were multiple arrests, and added that an officer was struck in the face by a bottle and required stitches.

In Seattle, protesters chained shut at least two doors to the downtown Pacific Place mall, police said. They later disrupted a tree-lighting ceremony at the nearby Westlake Center, and the mall closed early.

In Los Angeles, where more than 300 people have been arrested in Ferguson-related demonstrations this week, about 120 protesters marched through the streets. There were eight arrests, police said.