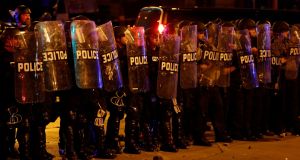 The black man whose killing sparked rioting in Milwaukee had a gun in his hand and was shot by a black officer after turning towards him, the city’s top policeman has said.

Meanwhile Wisconsin’s governor put the National Guard on standby against any further violence on the city’s mostly black north side.

Police chief Edward Flynn warned that the shooting was still under investigation and authorities were awaiting post-mortem examination results, but based on the silent video from the unidentified officer’s body camera, he “certainly appeared to be within lawful bounds”.

Milwaukee mayor Tom Barrett said a still image pulled from the footage clearly showed the gun in 23-year-old Sylville Smith’s hand as he fled a traffic stop on Saturday.

“I want our community to know that,” Mr Barrett said, but he also called for understanding for Smith’s family.

“A young man lost his life yesterday afternoon. And no matter what the circumstances are, his family has to be hurting,” he said.

Mr Flynn would not identify the officer who shot Smith but said he was black. The police chief said he was not sure what prompted the stop but described Smith’s car as “behaving suspiciously”.

After watching the officer’s body camera footage, Mr Flynn said the entire episode took about 25 seconds, from the start of the traffic stop until shots were fired. He said Smith ran “a few dozen feet” and turned towards the officer while holding a gun.

“It was in his hand. He was raising up with it,” the chief said. He said it was unclear how many rounds the officer fired.

At a vigil on the spot where her brother was killed, Smith’s sister Kimberly Neal (24) said she wanted prosecutors to file charges against the police officer.

Asked about the violence on Saturday night, Ms Neal said: “People stuck together and they are trying to stand up (for their rights).”

Earlier Sunday, governor Scott Walker activated Wisconsin’s National Guard and 125 guard members were reporting to local armouries to prepare for further instructions. Mr Flynn said they would not be deployed unless the chief decided to do so.

“I’m hopeful that will not be necessary,” the mayor said. “But if it is necessary, we will do so.”

Six businesses were burned in the unrest that spilled past midnight on Sunday. Seventeen people were arrested, Mr Flynn said, and four officers were hurt, none seriously.

Milwaukee alderman Khalif Rainey, who represents the neighbourhood that erupted, said the city’s black residents were “tired of living under this oppression”.

Mr Flynn said Smith had a lengthy criminal record with Milwaukee police. Online court records showed a range of charges against him, many of them misdemeanours.

The Milwaukee Journal Sentinel said Smith was also charged in a shooting and later with pressuring the victim to withdraw evidence that identified him as the gunman. The charges were dropped because the victim recanted the identification and failed to appear in court, chief deputy district attorney Kent Lovern told the newspaper.

“My son is gone due to the police killing my son,” Smith’s mother, Marilyn Haynes, told the Journal Sentinel. “I am lost.”

Nearly 40 per cent of Milwaukee’s 600,000 residents are black and they are heavily concentrated on the north side.

Milwaukee was beset by protests and calls for police reform after an officer shot and killed Dontre Hamilton, a mentally ill black man, in 2014.

In December the US Justice Department announced it would work with Milwaukee police on changes.

Critics said the police department should have been subjected to a full Justice Department investigation like the one done in Ferguson, Missouri, after the killing of black teenager Michael Brown (18) in 2014 sparked violence there.

The officer involved in the most recent Milwaukee shooting is 24 and has been a policeman for three years, according to the department.