Melania Trump: Donald Trump was ‘egged on’ into ‘boy talk’

Republican’s wife jokes in interview that she has two boys at home: her son and husband

Speaking about a conversation in 2005 that recently came to light, Melania Trump has told CNN's Anderson Cooper that she feels her husband Donald Trump was 'egged on' by television host Billy Bush. Video: CNN 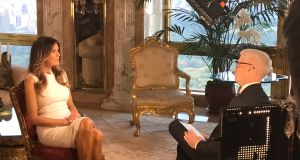 Donald Trump’s wife Melania Trump compared her husband’s behaviour to a teenage boy’s and said he was “egged on” by a TV host to make lewd remarks about women in 2005, dismissing his comments as “boy talk”.

Mrs Trump spoke to CNN in her first television interview to defend her husband since a video tape surfaced on which the Republican presidential nominee was heard bragging about sexually assaulting women and after several women accused the New York businessman of sexual improprieties.

She rejected the women’s allegations that Mr Trump groped them and forcibly kissed them without their consent as “lies”.

“I believe my husband,” she said, standing behind him in rejecting the accusations from the women who came forward last week after he denied during the second presidential debate that he had committed the acts he boasted about.

Repeating her husband’s claims that the charges were political motivated, the Slovenian-born former model said she was not surprised by the timing of the leaked tape or the women coming forward, blaming the “left-wing media” and Mr Trump’s Democratic opponents for trying to hurt his presidential hopes.

“Everything was organised because they want to influence the American people on how to vote,” she said in the interview broadcast just three weeks before the election.

Mrs Trump (46) said that she had not heard her husband use the words he spoke on the leaked tape before and that she had told him that his language was “inappropriate” and “not acceptable”.

The property developer and reality-TV star was caught on tape during the filming of a segment on the entertainment show Access Hollywood 11 years ago boasting that his celebrity allowed him to “do anything” to women including grabbing them by the genitals.

“I was surprised because that is not the man I know,” Mrs Trump said.

She described her husband’s comments as taking place during a private conversation which they may not have known was being recorded.

“As you can see from the tape, the cameras were not on - it was only a mic. And I wonder if they even knew that the mic was on,” she said, of the conversation caught on tape between her husband and the show’s host, Billy Bush, who officially left the NBC programme last night after being suspended.

Mrs Trump characterised the conversation between the two men as “boy talk” and claimed that her husband was “led on, like egged on, from the host to say dirty and bad things”.

She brushed off the comments as the way boys talk “when they grow up and they want to sometimes show each other, ‘oh, this and that’ and talking about the girls”.

Mrs Trump compared Mr Trump (70), the first person since Dwight Eisenhower to run as a major-party presidential candidate without ever having served in public office, to an adolescent.

“Sometimes I said I have two boys at home - I have my young son and I have my husband,” she quipped. “I know how some some men talk. That’s how I saw it.”

Mrs Trump said that if her husband was elected president in the November 8th election, she would like as first lady to “guide” children to help them deal with negative comments on social media.

“I see now in 21st century, the social media - it’s very damaging for the children,” she said. “We need to guide them and teach them about social media because I see a lot of negativity on it and we need to help them.”

Asked whether she had requested her husband to tone down his comments on social media, which he has used to attack political rivals and the media, Mrs Trump said she had advised him to do so but that it was ultimately his decision.

“He’s an adult. He knows the consequences,” she said. “I give him many advices but, you know, sometimes he listens, sometimes he doesn’t.”