Manhunt for Iraq war veteran after six killed in Pennsylvania

Pennsylvania police hunt for a suspect in the killing of six relatives whose bodies were found on Monday in towns around Philadelphia. Video: Reuters 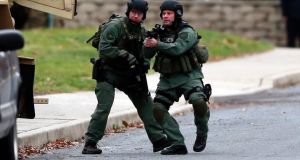 Police surround a home in Souderton, outside Philadelphia, where a suspect is believed to have barricaded himself after shootings at multiple homes. Photograph: AP Photo/Matt Rourke

An Iraq war veteran suspected of killing six family members in towns around Philadelphia is being hunted by Pennsylvania police.

The manhunt for Bradley William Stone, 35, was concentrated in and around Pennsburg, Pennsylvania, where residents were advised to remain indoors with their doors locked, the Montgomery County district attorney said.

The Associated Press reported that the police had converged on a home in Pennsburg and used a loudspeaker to try to compel an end to their day-long pursuit of Stone. The Pennsburg location was the second to be surrounded by the police.

“As we stand here right now, we don’t know where he is,” she said. Pennsburg is about 50 miles (80 km) northwest of Philadelphia.

Stone took his two young daughters from the home of his ex-wife but left them with a neighbour and they were safe, Ferman said. Stone at times uses a cane or walker, but Ferman said it was not clear if he actually needed a device and may not be using one. Stone suffers from post-traumatic stress disorder, local media said.

NBC reported that Stone had enlisted in the US Marine Corps Reserves in 2002 and was honourably discharged in 2011. He was deployed at least once to Iraq, NBC said, adding that his military records did not show that he had been wounded in combat.

Stone was believed to have gone on a shooting spree in three towns, first killing his ex-wife’s sister, husband and 14-year-old daughter in Souderton at about 3.30 am, local time. A 17-year-old son survived but was wounded and hospitalised, she said.

About an hour later, police received a hang-up call to 911 pointing them to a home in Lansdale, Ferman said. There they found two dead women – Stone’s former mother-in-law and former grandmother-in-law. About a half hour later, police received a 911 call from a neighbour of Stone’s ex-wife, Nicole, in Lower Salford. Police found the 33-year-old ex-wife shot to death.