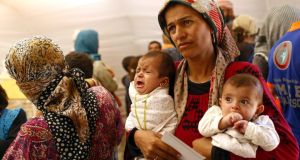 A Syrian refugee and her children are among the 140,000 people that have fled Kurdish villages in northern Syria to escape Islamic State attacks. Photograph: Sedat Suna/EPA

At the United Nations on Wednesday, US president Barack Obama was urging young people across the Muslim world to reject benighted values, even as America clambers into bed with a bunch of Middle East potentates who espouse benighted values.

Mr Obama has been working hard to get a coalition that includes Saudi Arabia, Qatar, Bahrain, Jordan and the United Arab Emirates because they provide cover in the fight against the brutal, metastasising threat of the Islamic State (IS), a “network of death” also known as Isis that American blunders – both of action and inaction – helped create.

Obama and secretary of state John Kerry have cajoled this motley crew for the coalition – US warplanes are doing most of the airstrikes in Syria – even though in countries like Saudi Arabia and Qatar, powerful elements are financing some of the same terrorists that their governments have been enlisted to fight.

At the United Nations on Tuesday, in a scene that took place in a fancy, old New York hotel that evoked Marlon Brando making the peace with the heads of the five families in The Godfather, Mr Obama offered a tableau of respect to the leaders of Saudi Arabia, Bahrain, Jordan, Qatar and the UAE.

“This represents partners and friends in which we have worked for very many years to make sure that security and prosperity exists in the region,” he said.

Justifying airstrikes
When American presidents rain down bombs on Muslim countries, they use the awful treatment of women in the Middle East as one of their justifications. In his speech at the United Nations, Mr Obama said he wanted “to speak directly to young people across the Muslim world” and urged them to create “genuine” civil societies.

“Where women are full participants in a country’s politics or economy, societies are more likely to succeed,” he said. “And that’s why we support the participation of women in parliaments and peace processes, schools and the economy.”

Yet, because we need the regressive rulers in the Persian Gulf to sell us oil and buy our fighter jets and house our fleets and drones and give us cover in our war coalitions, we don’t really speak out about their human rights violations and degradation of women as much as we should.

The Obama administration was sparked into action by the videos of IS beheading two American journalists. Yet Saudi Arabia – wooed by Mr Kerry this month to join the coalition – has been chopping off heads regularly, sometimes for non-lethal crimes such as drug use or sorcery.

The president should just drop the flowery talk and cut to the chase. Americans get it. Let’s not pretend we’re fighting for any democratic principles here.

America failed spectacularly in creating its democratic model kitchen with Iraq. So now we have to go back periodically and cut the grass, as they say in Israel, to keep our virulent foes in check.

It is pre-emption. But the difference with Obama’s pre-emption is that there is an actual threat to the globe from a vicious, maniacal army. Former president George W Bush, Dick Cheney, Donald Rumsfeld, Paul Wolfowitz and Condoleezza Rice made up a threat to America from a contained and diminished Saddam Hussein to justify pre-emption and serve their more subterranean purposes.

Eight months ago, the president was reduced to threatening to act without Congress, warning: “I’ve got a pen, and I’ve got a phone.”

Now he’s brandishing bombs and drones on a scale he’s never done before. The ex-community activist, elected on a peace platform, has grown accustomed to coldly ordering the killing of bad guys.

“It’s hard to imagine that in his wildest dreams – or nightmares – he ever foresaw the inbox he has,” said Richard Haass, the president of the council on foreign relations.

But, as Harold Macmillan, the former British prime minister, once said when asked what disrupted his best-laid plans: “Events, dear boy, events.”

As the US woos the Arab coalition, Arab leaders are not speaking out against the atrocities of IS against women.

“It is the obligation and duty of Arab countries – where men always feel so possessive about their mother, their wife, their daughter – to condemn Isis’s violence against women,” said Haleh Esfandiari, director of the Middle East Programme at the Wilson Centre. “Why don’t they say a word?

“I’ve been working with women in the Middle East for 40 years, and I’ve never seen such brutality, such barbarism as that which Isis is committing against women. It is unbelievable.”

We are so far from where we were in 2003, with George W Bush bragging about his cakewalk of weakening dictators, forging democracies and recognising the rights of women. As it has rampaged like a flesh-eating virus through the region, IS has been targeting professional women.

An Iraqi lawyer who worked to promote women’s rights was grabbed from her home last week after she posted complaints on her Facebook page about Islamic State’s “barbaric” destruction of mosques and shrines in Mosul.

Sameera Salih Ali al-Nuaimy was tortured for days and then executed by a masked firing squad on Monday.

In a Wall Street Journal piece headlined “Isis’ cruelty toward women gets scant attention,” Esfandiari toted up a litany of horrors, including the tragic story of a woman who was tied to a tree, naked, and repeatedly raped by IS fighters, who have become known for such savagery as they assault and pillage their way across the region.

She noted that, even though IS propaganda emphasises protecting the morality of women, it has taken pre-adolescent girls and married them off to fighters three times their age, set up “marriage bureaus” in captured Syrian towns to recruit virgins and widows to marry militants, and tied together women with a rope as though “they were being led to a makeshift slave market.”

She added that “it’s a strategy to shame women and undermine their families. In our part of the world, a woman who has been raped, whether once or 50 times, feels ashamed, her family feels ashamed. Some commit suicide. ”

‘The power of local realities’

Haass noted that one of the lessons we should have learned in fighting halfway around the world, from Vietnam to Iraq, is “the power of local realities.”

“One of the things we’ve learned is that we can’t deliver fundamental social and cultural transformation in this part of the world,” he said. “Our ability to influence the position or status of women in the Arab or Muslim world is limited.”

He said the Arab coalition is necessary because “our priority has got to be to push back and weaken Islamic State.

“Even if we’re not in a position to give women the better life they deserve,” he concluded, “we are in a position to save many of them from what Isis would do to them. And that’s significant.”