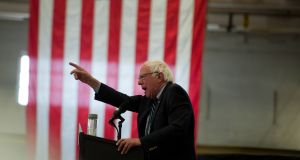 In the City of Brotherly Love, there was not much sisterly affection for Hillary Clinton among Bernie Sanders’s supporters at a rally on Monday night.

Not even the prospect of Clinton making history by becoming the first female president was enough to encourage Sanders supporters in Drexel University in Philadelphia to change their allegiance, in the primary at least.

“Not that woman – any other woman,” said Beatrice Stern (59), a multistate Sanders campaigner who runs a nonprofit organisation in New York.

Wearing a “Latinos for Bernie” badge, Stern, whose husband is Latin American, cannot forgive Clinton for her support as secretary of state for a military coup in Honduras in 2009 that ousted the country’s democratically elected president, Manuel Zelaya.

She points out that for the first time she, her 92-year-old mother and her 22-year-old daughter are all voting for the same candidate.

For Mary Ortner (56), a retired schoolteacher from New Jersey sitting next to Stern, it is Clinton’s close, long-established ties with Wall Street and big business that rankle with her.

“She is the old affiliations. The Wall Street money doesn’t go away. We don’t forget and the kids don’t forget,” she said at the rally, filled again with the young people Sanders is winning by such large numbers.

Although the Vermont senator lost the primary in New York, Clinton’s adopted home state, by a big margin, he again beat the former first lady among young people. A CNN exit poll showed he won 81 per cent of 18- to 24-year-olds and 53 per cent of 25- to 29-year-olds.

The Millennials’ support has not been enough on its own for Sanders. Struggling to make up a 272-delegate deficit (as it stood prior to Tuesday’s five state contests) on the road to a 2,383-delegate winning majority, the self-described democratic socialist has nonetheless said he still sees a way to win.

Sanders requires as many as seven of every 10 remaining pledged delegates to put pressure on about 500 super-delegates – elected Democrats and party leaders – who are already backing Clinton to switch.

Supporters at the Philadelphia rally pointed to her support among these Democratic establishment figures as another example of the “undemocratic” or rigged electoral system that Sanders is railing against.

“It’s a narrow path, but we do have a path,” said Sanders as voters headed to the polls in Connecticut, Delaware, Maryland, Pennsylvania and Rhode Island yesterday for another big day in the presidential race.

While Sanders claims to have begun a “political revolution” in a campaign for free universal healthcare and free college education – and by taking on the “billionaire class” and a “corrupt” campaign finance system – voter turnout is down significantly in many states on the past two Democratic primaries.

Clinton has scored a big lead by winning a much wider Democratic base that includes white voters and ethnic minorities, and banking major victories in the delegate-rich states of New York, Texas, Florida and Ohio.

One of her biggest challenges if she, as the polls suggest, sees off her competitor and wins will be unifying the party’s grassroots, including young voters, for the November fight against the Republicans.

Even though it looks like an uphill climb for Sanders to catch Clinton, his young supporters believe his campaign has achieved much by pushing her to the left, raising grassroots expectations and opening the door for others.

“He has given hope to so many people; he has started something,” said Ella Rose (27) who runs a religious nonprofit organisation promoting awareness of homelessness and hunger in Philadelphia. “People can be more comfortable now being progressive.”