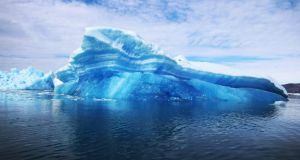 Icebergs from nearby melting glaciers are seen floating on the water in July, 2013, Greenland. The UN’s Intergovernmental Panel on Climate Change (IPCC) has published earlier drafts of its latest report on global warming in an effort to bolster its credibility and disarm climate change deniers. Photograph: Joe Raedle/Getty Images

The UN’s Intergovernmental Panel on Climate Change (IPCC) has taken the unprecedented step of publishing earlier drafts of its latest report on global warming and all 54,677 written contributions by expert and government reviewers.

This is seen as a co-ordinated effort by the IPCC to bolster its own credibility and disarm climate change deniers in the wake of controversies over such “mistakes” as a poorly grounded forecast that Himalayan glaciers would melt by 2035.

The report, Climate Change 2013: The Physical Science Basis, was published last September. It confirmed that warming was “unequivocal”; human influence on the climate system was “clear”; and huge reductions in greenhouse gas emissions were needed.

The full report, released yesterday as part of the IPCC’s Fifth Assessment of climate change, runs to more than 1,500 pages, includes 600 diagrams and cites in excess of 9,000 scientific publications since the IPCC’s Fourth Assessment in 2007.

It includes a new atlas of global and regional climate projections with maps of temperature and precipitation projections for 35 regions of the world, and underlying data, which “enhance accessibility for stakeholders and users”.

The latest report was published as climate activists expressed outrage over revelations that the US National Security Agency was spying on participants in the annual UN climate conferences.

Asad Rehman of Friends of the Earth UK said US president Barack Obama “must use an executive order to stop spying on climate negotiators and take up a position on pollution cuts that is consistent with the science”.

See climatechange2013.org for the report.