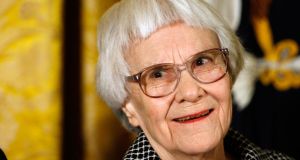 An Alabama agency has closed an investigation into whether Harper Lee was manipulated into the publication of a second novel. Photograph: Getty

An Alabama agency has closed an investigation into whether Harper Lee, the 88-year-old author of To Kill a Mockingbird, was manipulated into the publication of a second novel after she made clear she wanted it in print, a state official has said.

The Alabama Securities Commission opened its investigation after an unspecified complaint of elder abuse, first reported by the New York Times, tied to the upcoming publication of Go Set a Watchman.

“We made a determination that Ms Lee, based on our interview with her, was aware that her book was going to be published,” said Joseph Borg, who heads the commission. “She wanted it to be published. She made it quite clear she did.”

Borg said the commission looked into the case at the request of the Alabama Department of Human Resources, which is charged with protecting against elder abuse.

Lee’s attorney, Tonja Carter, has dismissed publicly aired concerns, including from actress Mia Farrow and writer Madeleine Davies, about whether Lee was pressured into agreeing to have the book published.

“She is alive and kicking and happy as hell with the reactions of Watchman,” Carter said in a statement.

Go Set a Watchman was written before To Kill a Mockingbird, which won a Pulitzer Prize after its 1960 publication, sold more than 30 million copies and was adapted into an Academy Award-winning film.

The new book, scheduled to be published on July 14th, features lawyer Atticus Finch 20 years after the action of To Kill a Mockingbird, as his adult daughter, Scout, returns to visit him in the fictional town of Maycomb, Alabama.