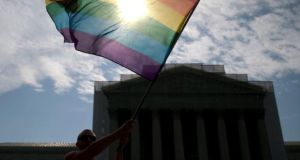 Same-sex couples began marrying in Alabama despite an attempt by the conservative chief justice of the state’s supreme court to block judges from issuing marriage licences to gay men and women in open defiance of a January federal court ruling.

Action by the US supreme court today helped clear the way for Alabama to become the 37th state to allow same-sex couples to marry. The justices refused a request by Alabama’s attorney general to keep such marriages on hold until the high court rules on whether laws banning them are constitutional.

In Birmingham, dozens of same-sex couples married at the courthouse and an adjacent park, where they were greeted by supporters supplying cupcakes along with a handful of protesters bearing crosses and Bibles.

Wiping away tears, Eli Borges Wright (28) said he was overjoyed to be marrying the man with whom he has been in a relationship for the past seven years. “After all of these years, I can finally say this is my husband,” he said.

Alabama supreme court chief justice Roy Moore had sought to put up a last-minute roadblock for marriages between same-sex couples.

Late on Sunday, the chief justice issued an order directing probate judges in his state not to provide marriage licenses to gay couples. The chief justice asserted that those judges were not bound by a federal ruling that last month struck down Alabama’s ban on same-sex marriages.

This was not Moore’s first foray into controversy. In 2003, he was removed from office after defying a federal order to take down a Ten Commandments monument he had erected in the state’s judicial building. He was returned to his post by voters in 2012.

US district court judge Callie Granade, an appointee of Republican president George W Bush, ruled in January that Alabama’s prohibition on same-sex marriage was unconstitutional but put her decision on hold until Monday.

Two of the US supreme court’s conservative justices, Clarence Thomas and Antonin Scalia, dissented from the court’s decision not to further delay gay marriage in Alabama.

In a dissenting opinion, Justice Thomas wrote that the high court’s actions in allowing marriages to go ahead “may well be seen as a signal of the court’s intended resolution of that question”

In April, the supreme court is set to hear oral arguments in cases concerning marriage restrictions in Michigan, Kentucky, Ohio and Tennessee. A ruling, due by the end of June, will determine whether state prohibitions on gay marriage violate the US constitution’s guarantee of equal protection under the law and whether the remaining 13 state bans can remain intact.