Ferguson police officer Darren Wilson says he felt like a child trying to stop the wrestler Hulk Hogan when he got into a scuffle with 18-year-old Michael Brown. Video: ABC News/Reuters 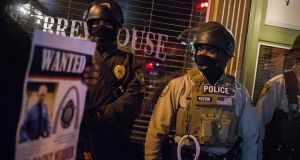 The white police officer who fatally shot an unarmed black teenager in a St. Louis suburb has resigned, his lawyer said on Saturday, as activists set out on a 193km march to protest the killing and a grand jury’s decision not to indict him.

The resignation of Darren Wilson from the Ferguson, Missouri, police force comes nearly four months after he killed 18-year-old Michael Brown and days after the announcement that he would not face criminal charges.

The incident, which has led to months of sometimes violent protests in Ferguson, has reignited a debate over race relations and the use of police force in the United States.

Neil Bruntrager, a lawyer for Mr Wilson, confirmed that the officer had submitted his resignation, a move that was long anticipated, no matter the outcome of the grand jury’s deliberations.

“In terms of his safety, it is probably the best thing for him,” said Cynthia Burnes (26), a nurse’s assistant from St Louis who was among about 50 people gathered in front of the Ferguson police headquarters on Saturday evening. “He is black-listed from this moment on.”

A man was arrested at the scene after he knelt in the middle of the street with his hands raised, chanting “Hands up, don’t shoot”, a common refrain at Ferguson protests.

In a letter published by the St Louis Post-Dispatch, Mr Wilson said he had been told that “my continued employment may put the residents and police officers of the City of Ferguson at risk, which is a circumstance that I cannot allow”.

Wilson, who said he was acting in self-defence when he shot Mr Brown, said he wanted to wait until after the grand jury’s decision before he made his decision to resign, according to the letter.

Following a night of looting and arson in Ferguson in response to the decision, demonstrations this week spread to other major US cities.

In Oregon, ten protesters were arrested on Saturday after laying down in the street and disrupting traffic.

According to the Portland city police bureau, the nine adults and one juvenile face charges including disorderly conduct.

On Saturday activists shifted gears by setting off on a seven-day march from Ferguson to Jefferson City, the state capital. The march, reminiscent of the civil rights marches of the 1960s, was organised by the National Association for the Advancement of Colored People (NAACP).

Other protesters targeted shopping malls on Black Friday, the day after Thanksgiving, as the holiday shopping season got under way.

The NAACP is calling for a reform of police practices, a new police chief in Ferguson and a national law to prevent racial profiling by police.

More than 150 people set out on the ‘Journey for Justice’ from the Canfield Green Apartments, near the spot where Mr Brown was shot and killed, with some marchers singing the decades-old protest song We Shall Overcome.

Sandra Henry (53), a registered nurse from St Louis, said she was marching to press for reform of police practices.

“This isn’t just about St Louis. We are speaking for other cities, other countries too,” Ms Henry said.

All told, about 100 marchers were expected to make the entire journey, with about 1,000 expected to be part of the final leg of the march, said NAACP staff member Jamiah Adams.

By nightfall, a dozen people had gathered at the Ferguson police station, the scene of some of this week’s worst riots. No police officers were standing out front but a small crew of national guard lingered in the back.

The shooting and its aftermath are taking a toll on the state’s finances. Missouri Governor Jay Nixon has called for the state assembly to convene for a special session to approve more funds for the Missouri Highway Patrol and the National Guard after months of protests over Mr Brown’s death.

In New York, activists rallied in Harlem on Saturday to draw parallels between Mr Brown’s death and what they see as other cases of unjustified police violence.