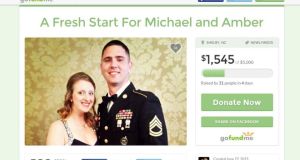 Amber Roof’s GoFundMe page as it appeared before it was suspended. 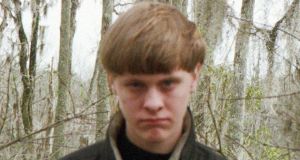 Dylann Roof in an undated photo taken from his Facebook account before he allegedly fatally shot nine people at a historically black South Carolina church in Charleston on June 17th last.

The sister of the man suspected of killing nine people at the Emanuel AME church in Charleston, South Carolina, last month launched a crowdfunding campaign to help cover the lost costs of her wedding, which had been cancelled in the wake of the mass shooting.

A GoFundMe page, which appears to have been created by Amber Roof, asks donors to help her and her fiance, Michael Tyo, gain a “fresh start” after their wedding was abruptly called off.

Roof appeared to refer to her brother Dylann, who stands accused of killing nine African-Americans after a Bible study with intent to start a race war. She did not reference her brother by name anywhere on the page.

Launched on June 27th, the page was abruptly suspended on Thursday afternoon after the campaign was picked up on social media and by news outlets.

Requests for comment to both Roof and GoFundMe were not immediately returned. It is not yet clear whether Roof or GoFundMe suspended the campaign.

Roof and Tyo’s wedding was due to take place on Sunday, June 21st - four days after the church shooting.

On the GoFundMe page, Roof pledged to donate 10 per cent of the funds to the Emanuel AME church.

Some donors on the GoFundMe page have left messages of support for Roof and Tyo.

The response on social media however has been critical, with some decrying Roof’s apparent lack of sensitivity.

Several comments left by people who donated suggesting those donors send money to the Emanuel AME church fund instead were no longer visible, though their donations and names still were.

One by a poster calling themselves “American BlackLives Matter” who donated $9 “for the nine victims” of the shooting, had their comments deleted. Some of the original critical comments are quoted in a Charleston Post & Courier article.

Roof accused the media of “destroying” her dream day, by “abusing our privacy and publish[ing] all of our wedding information”.

However, Roof and Tyo’s wedding registry on TheKnot.com is still up and open to the public.

Several people had made larger $100 or $200 contributions. One woman had donated funds and identified herself as a former college sorority sister who had since lost touch with Roof. Several others donated anonymously.

The link to the campaign had been shared more than 500 times.

The page has been up since June 27th. Between the hours of 10.40am (when the Charleston Post & Courier published its article on Roof and Tyo’s campaign) and publication time, the number of shares increased sixfold, and the number of donors doubled.