Billionaire wins by 45 per cent, tells protester he would ‘like to punch him in the face’

Donald Trump inched closer to the U.S. Republican presidential nomination after easily winning against his rivals in the Nevada caucuses on Tuesday (February 24), giving him his third win in four early nominating contests. 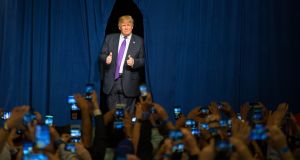 Billionaire outsider Donald Trump has won the Nevada caucuses, earning his third straight victory in the race to be the Republican nominee in November’s US presidential election.

Mr Trump is poised to win by his biggest level of support yet in the first state to vote in the American west, adding to his resounding victories in New Hampshire in the north east and South Carolina in the south.

He has taken three of the first four Republican qualifying contests, building a momentum as he heads into the “Super Tuesday” contests on March 1st when Republican voters in a dozen states pick a nominee.

“We will be celebrating for a long time tonight,” Mr Trump told a raucous crowd of supporters at the Treasure Island casino in Las Vegas.

Two Republican senators, Marco Rubio of Florida and Ted Cruz of Texas, were battling it out for a second place in Nevada in their contest that is threatening to become irrelevant given Mr Trump’s strong lead.

The businessman was leading with 45 per cent of the vote with just 10 per cent of caucus-goers reporting, ahead of Mr Rubio on 23.6 per cent and Mr Cruz on 22.3 per cent. The two remaining candidates in the field - retired neurosurgeon Ben Carson and Ohio governor John Kasich - received 5 per cent and 3 per cent respectively.

“A couple of months ago, we weren’t expected to win this one, you know that, right? We weren’t,” Mr Trump told his Nevada victory party.

In his concession speech, Mr Cruz touted his victory in the inaugural nominating test in Iowa, telling supporters: “The only campaign that can beat Donald Trump is this campaign.”

Mr Trump, a property and entertainment mogul, is ahead in the polls in all of the states that vote on March 1st except Arkansas and Texas, Mr Cruz’s home state.

He leads in the staunchly conservative Alabama and Georgia as well as in the Democratic-leaning Massachusetts, reflecting his broad level of support in the most unconventional election race in a generation.

Mr Trump’s brash assault on the political establishment in an insurgent campaign struck a chord with Republicans in Nevada as he motivated the angriest electorate for the party in a nominating contest to support him.

The businessman’s campaign has confounded pundits and political scientists alike with racist and misogynist rhetoric as well as insults and name-calling of rival candidates.

Mr Trump responded angrily to a protester at a Las Vegas rally on the eve of the caucuses, saying: “I’d like to punch him in the face.”

Entrance polls showed that six in 10 caucus-goers in the state said that they were angry at the federal government, significantly higher than voter anger against Washington in Iowa, New Hampshire and South Carolina.

Beyond outright anger, a further 36 per cent of Republican caucus-goers in Nevada said that they were dissatisfied with the government.

Six in 10 said that they wanted someone outside the political establishment to represent them compared with just one in three who preferred a candidate with experience in politics.

The businessman showed again his broad appeal among Republican voters, scoring well among moderate, conservatives and evangelicals, in a Republican electorate that was overwhelmingly white.

Jobs and the economy were cited by 29 per cent of voters as the most important issue, followed by government spending at 27 per cent, immigration at 21 per cent and terrorism at 19 per cent.

In a remarkable statistic, though one with a large 10 per cent margin of error and on a small sample, a CNN entrance poll found that 44 per cent of Latinos in Nevada voted for Mr Trump, beating two rivals of Hispanic descent with Mr Rubio on 29 per cent and Mr Cruz on 18 per cent.

“We won Hispanics but let me tell you, Mexico is going to pay for the wall. It is going to happen,” Mr Trump told supporters, repeating his plan to build a wall along America’s southern border with Mexico.