Republican rejects report he used $258,000 from his charity to settle business disputes 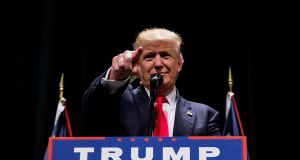 Donald Trump’s campaign has come out swinging at the Washington Post over a report that the billionaire used $258,000 (€231,000) of his charity’s donated money to settle legal actions.

The newspaper reported that the Republican presidential nominee may have broken laws prohibiting “self-dealing”, where managers of non-profit groups used charity funds to benefit themselves or their companies, detailing a string of dubious payments by Mr Trump.

Post reporter David Fahrenthold, who has been investigating the reality TV star’s charitable giving for months, found that the New York businessman paid $100,000 of his foundation’s money to settle unpaid fines levied by the town of Palm Beach in Florida after his Mar-a-Lago oceanfront golf course breached height restrictions by flying an American flag on an 80-foot pole. Town rules set height restrictions at 42 feet.

On another occasion, Mr Trump settled a legal claim taken by a man who sued after he was not paid for winning a $1-million hole-in-one competition at a charity golf tournament at the property developer’s course in New York. The property mogul eventually made a $158,000 donation from his charitable foundation to the golfer’s own charity to settle the legal action.

The Trump campaign issued a statement saying that the Post’s report was “peppered with inaccuracies and omissions” and claiming that Mr Fahrenthold was “a biased reporter”. The businessman has not yet offered evidence to rebut the accusations.

The newspaper has previously reported that Mr Trump used $20,000 from the Donald J Trump Foundation to buy a six-foot-tall painting of himself and another $25,000 to make a political donation to a group support Florida attorney general Pam Bondi at a time when she considered whether to investigate fraud allegations against his Trump University.

Tax records for Trump’s foundation show that he has not made any significant donations to his charity since 2009, relying instead on outside donations from other people.

At a rally in North Carolina on Tuesday, the businessman bragged about using “OPM” or “other people’s money” in business, saying that he would do the same if elected US president by making Middle Eastern states pay for the building of safe zones in Syria.

The Real Clear Politics average of polls shows that Trump has reduced Clinton’s lead to one point nationally, though the election outcome will rest on a handful of states.

The Democrat’s advantage in the electoral college system – where votes are awarded proportionately based on the populations of states – will likely mean that Clinton will need fewer wins in too-close-to-call states than Trump, should she win Pennsylvania, Virginia and Colorado, states that Barack Obama won twice. She holds commanding leads in these states.

In the most closely watched and biggest swing states, polls show the two candidates locked in virtual ties in Florida, Ohio and North Carolina, while Trump has a slight advantage in Nevada and leads by four points in Iowa, a state that twice swung for Obama.

A new Monmouth University poll gave Clinton a nine-point lead in New Hampshire, a state that has voted Democrat in the past three elections but which is being targeted by Trump.

1 Covid-19: Travel restrictions to stay and 'green list' put on hold amid fears of second wave
2 Bobby Storey: The IRA's planner and enforcer who stayed in the shadows
3 ‘Only a civil servant’ could have come up with ‘unenforceable’ pub regulations
4 Trump claims US is under siege from ‘far-left fascism’ in Fourth of July event
5 Transgender Cork farmer (65) surprised at positive response to telling her story
Real news has value SUBSCRIBE