Bradley Manning says he wants to live as a woman

‘I want everyone to know the real me. I am Chelsea Manning, I am a female,’ says US soldier jailed for 35 years for leaking documents to WikiLeaks 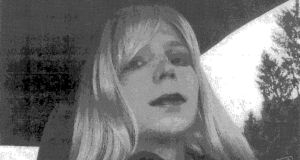 US soldier Bradley Manning is pictured dressed as a woman in this 2010 photograph. In a statement read on NBC News Manning said he is female and wants to live as a woman named Chelsea. Photograph: US Army/Handout/Reuters

US soldier Bradley Manning, sentenced for leaking classified documents, said he is female and wants to live as a woman named Chelsea.

“As I transition into this next phase of my life, I want everyone to know the real me. I am Chelsea Manning, I am a female,” Manning (25) said in the statement read on the NBC News Today show. “Given the way that I feel and have felt since childhood, I want to begin hormone therapy as soon as possible.

“I also request that starting today you refer to me by my new name and use the feminine pronoun.”

Manning was sentenced yesterday to 35 years in a military prison for turning over 700,000 classified files to WikiLeaks in the biggest breach of secret data in US history.

His lawyer, David Coombs, also told NBC that he expects Manning to get pardoned from US president Barack Obama.

Mr Coombs said Manning was seeking hormone therapy and not a sex-change operation. “I’m hoping that Fort Leavenworth will do the right thing and provide that. If Fort Leavenworth does not, then I’m going to do everything in my power to make sure that they are forced to do so,” he said.

A US army spokeswoman said in an emailed statement: “The Army does not provide hormone therapy or sex-reassignment surgery.” She said military inmates have access to mental health professionals, including a psychiatrist, psychologist, social workers and behavioural science specialists.

Asked if Manning wanted to be sent to a women’s prison, Mr Coombs said no. “I think the ultimate goal is to be comfortable in her skin and to be the person that she’s never had an opportunity to be,” he said.

Mr Coombs said he was not worried about Manning’s safety in a military prison since inmates there were first-time offenders who wanted to complete their sentences and get out. Experts generally view military prisons as safer than civilian prisons since the inmates are accustomed to hierarchy and discipline.

Manning had not wanted his sexual identity issues to become public, but they did after his arrest in 2010, Mr Coombs said. “Now that it is (public), unfortunately you have to deal with it in a public manner,” he said.

A psychiatrist, Navy Reserve Captain David Moulton, testified during Manning’s trial that he suffered from gender dysphoria, or wanting to be the opposite sex, as well as narcissism and obsessive-compulsive disorder.

Defence lawyers had argued that Manning had been increasingly isolated and under intense stress when he leaked the files, and that his superiors had ignored warning signs.

They cited erratic behaviour, including sending a picture of himself dressed as a woman to a superior and punching another soldier.

Manning was working as an intelligence analyst in Baghdad in 2010 when he gave WikiLeaks a trove of diplomatic cables and battlefield accounts that included a 2007 gunsight video of a US Apache helicopter firing at suspected insurgents in Iraq, killing a dozen people including two Reuters news staff. During the trial, defence lawyers said

Manning had hoped the document release would open Americans’ eyes to the wars in Iraq and Afghanistan and provoke a more intense debate. Prosecutors contended that the soldier placed national security at risk by revealing confidential information.

Manning said in a statement read by his lawyer that he chose to release the files out of moral concerns. “I started to question the morality of what we were doing,” he said. “We had forgotten our humanity.” Prosecutors declined to comment after the sentence was read.

WikiLeaks’ Julian Assange applauded Manning’s defence but decried the trial and verdict. “While the defence should be proud of their tactical victory, it should be remembered that Mr Manning’s trial and conviction is an affront to basic concepts of Western justice,” Mr Assange said in a statement published at WikiLeaks.org.