Comedian’s persona as model dad, public moralist battered by his own admissions 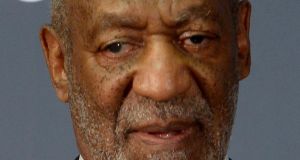 Bill Cosby: the comedian admitted a decade ago that he drugged women for sex using quaaludes. Photograph: Michael Loccisano/Getty Images

Bill Cosby’s endearing image as the ideal American dad Dr Heathcliff Huxtable from his 1980s sitcom The Cosby Show has taken a further battering after it emerged that he admitted a decade ago that he drugged women for sex.

The comedian disclosed in a deposition in a 2005 civil court action that he obtained prescriptions of quaaludes, a powerful sedative popular on the disco scene in the 1970s and 1980s, and gave them to women he wanted to have sex with.

Documents were released to the Associated Press by a Pennsylvania court where a former employee of Mr Cosby’s alma mater, Temple University in Philadelphia, accused him of drugging and sexually assaulting her at his home in 2004.

Mr Cosby settled the case in 2006 on undisclosed terms and the testimony given by the comedian, now 77, was held “under seal”.

More than two dozen women have accused Mr Cosby of sexual misconduct, including allegations by some that he drugged and raped them in incidents dating back more than four decades.

He has never been criminally charged, denies the claims and has vigorously tried to stop cases against him.

During the 2005 action, Mr Cosby was asked by the woman’s attorney about his use of prescription pills.

“When you got the quaaludes, was it in your mind that you were going to use those quaaludes for young women that you wanted to have sex with?” the lawyer asked. “Yes,” Mr Cosby replied.

The comic admitted he gave the sedative to at least one woman and “other people”.

He recalled another incident in the 1970s when Mr Cosby, then in his late 30s, met a woman in Las Vegas.

“She meets me back stage. I give her quaaludes. We then have sex,” he said.

Mr Cosby’s lawyers fought the request from the Associated Press to unseal the court papers arguing that it would be “terribly embarrassing” for him if the records were released.

The judge who unsealed the documents said that he did so because of the sharp difference between Mr Cosby’s upstanding public persona and the serious allegations against him.

“The stark contrast between Bill Cosby the public moralist and Bill Cosby the subject of serious allegations concerning improper (and perhaps criminal) conduct is a matter as to which the AP, and by extension the public, has a significant interest,” said Judge Eduardo Robreno.