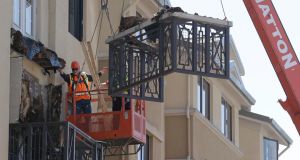 Fr Brendan McBride, who runs San Francisco’s Irish Immigration Pastoral Centre, has been helping Irish students who were at Tuesday’s birthday party in Berkeley where 13 of their friends fell from the balcony.

The Co Donegal native and his staff were among the first to respond to the tragedy at the Library Gardens student accommodation building on Kittredge Street that killed six Irish students and injured seven others. Two of the injured were still in critical condition in an hospital in nearby Oakland yesterday.

Some of an estimated 40 J-1 visa students who were at a party in Unit 405 in the building at 2020 Kittredge Street ran to the scene on the street below and were alone with their fatally and critically injured friends before police arrived from their headquarters two minutes later.

Fr McBride has been helping some of the students who experienced the trauma of that moment but has yet to speak to them about it.

“I didn’t go into it because it was too deep and personal. You don’t want them to relive something just for the sake of conversation,” he said. “It is a very personal moment for them. I am sure it is a memory that will stay with them for the rest of their lives.”

The Irish Consulate in San Francisco and the pastoral centre have set up a crisis and support centre in the City of Berkeley public safety building, a short walk from the student accommodation complex.

The centre is the temporary home for grief counsellors and representatives of the US agencies which run the J-1 programme for the US state department, CIEE, which is based in Portland, Maine, and InterExchange, which is based in New Jersey. These two agencies will be helping the students and their families cover the cost of medical expenses and emergency-related costs associated with the incident, through the programme’s insurance policy.

“We are just trying to keep an eye on them, especially the ones who were there before the first responders,” he said.

The Irish Consulate yesterday named the seven injured: Clodagh Cogley, Aoife Beary, Niall Murray, Hannah Waters, Seán Fahey, Jack Halpin and Conor Flynn. They are aged between 20 and 22. Six are from Dublin, while the other is from Donegal.

The first relatives started arriving in San Francisco from Ireland on Tuesday night – the parents of Olivia Burke, one of the six students killed, along with the parents of Ms Waters and Ms Beary, who are in Highland Hospital in Oakland.

The remaining parents and other relatives were scheduled to arrive on a direct Aer Lingus flight from Dublin yesterday. The consulate and pastoral centre were busy in advance of their arrival organising transportation to and from the hospitals in the Bay Area where the injured students are being treated – and looking for short and long-term accommodation.

“They are going through a very different rollercoaster of emotions. We have got them stabilised in the sense that we have got a crisis centre set up.”

At the nearby Library Gardens building, mourners, including Irish students and local American residents, continued to leave flowers, notes of condolence and mementos at a memorial to the six young Irish people. Late on Tuesday night, some stood there in silence for long periods, reading notes in the candlelight.

Yesterday morning a “Berkeley Irish-American Mom” left flowers, a box of tissues and and note which read: “As the mother of a young adult and as an Irish-American, I want you to know that I and many, many others here are holding you in our prayers.”

Police are still trying to figure out what happened during the party in the lead-up to the balcony collapsing at 12.41am.

Warren Vercruysse (22), from Belgium, was in his unit on the first floor on the other side of the building from the student’s apartment. “I heard a huge noise like a bang. I couldn’t quite figure out what it was. I first thought it was the firing of a gun or fireworks.”

The building shook from the impact of the balcony hitting the street.

Philip Grant, the Irish Consul General, had heard from parents that some of the dead and injured may have fallen trying to save others but couldn’t confirm this. “It is hard to know,” he said.

Support staff have not asked the students at the party about that; they are leaving the “what happened” to police investigators. “We are leaving that to the appropriate authorities at the moment,” said Grant.

The investigation is being led by the City of Berkeley’s building safety department and is not a criminal inquiry.

Structural engineers, working with police and fire department investigators, will look at what happened to the balcony and what caused the seven supporting beams to give way. From the visual evidence it was clear a number of the beams had rotted.

Fr McBride said it was “by far the worst” tragedy he had seen in his 20 years in the Bay Area.

“You would have occasional tragedies but nothing to this extent where you have six young people. It is just mind-boggling.

“These beautiful young kids, full of life, coming to California, the dream summer, the J-1, everyone has done it – it is heartbreaking.”