America Letter: Retailers have Roosevelt to thank for Black Friday 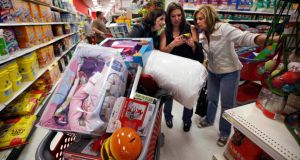 The people most thankful for Thanksgiving, the biggest holiday in the American calendar, this year appear to have been retailers.

The National Retail Federation estimated that 95 million shoppers worked off their turkey and pumpkin pie excesses yesterday by rushing to snag holiday discounts on Black Friday, the busiest shopping day of the year that falls after Thanksgiving Thursday.

Thanksgiving became a big shopping event in 1939 when President Franklin D Roosevelt, under pressure from retailers still suffering in the latter years of the Great Depression, moved the holiday from the last Thursday of November to the fourth Thursday. This meant, in some years, it was further away from Christmas giving shops two strong sales boosts. The holiday that year was known as “Franksgiving.”

The term “Black Friday” was first used to describe a stock-market plunge in September 1864 when gold prices tanked. Philadelphia newspaper editors resurrected the phrase in the late 1960s to describe a rush of shoppers in stores and the term was later explained by the colour of ink used by accountants to signify a profit on a balance sheet.

It can be a terrifying time as shoppers try to fight off (literally on some occasions) other shoppers to land bargains. A website that has tracked retail casualties on this full-contact shopping day, Black Friday Death Count, has recorded nine deaths and 90 injuries since 2006.

Six years ago 34-year-old Walmart worker Jdimytai Damour died from asphyxiation when he was trampled to death beneath a stampede of shoppers who burst through the front doors of a store in Long Island, New York. Most of the deaths arise as a result of car accidents involving shoppers travelling to and from shopping centres.

Retailers hate to lose market share and some have decided to open their stores on Thanksgiving to beat the rush and the competition for early-bird shoppers. Kmart and Radioshack both opened on Thanksgiving morning with dozens of people lining up at stores from as early as 3am. Target and Best Buy were also among the early openers.

One group called Credo Action has been championing the rights of workers called in to work before dawn on Thanksgiving who are offered little by way of incentive. There is no obligation on companies to pay staff holiday wages . More than 60,000 people have signed the group’s petition urging retailers to stay closed on Thanksgiving. A “Boycott Black Thursday” Facebook page has more than 100,000 “likes”.

Radioshack has tried to strike a happy medium by opening from 8am to 12 midnight on Thanksgiving Day and closing from 12 noon to 5pm to allow employees time to enjoy the holiday with their families.

Labour laws in three New England states – Massachusetts, Rhode Island and Maine – prevent shops opening in those states. These so-called “blue laws” were first drafted in colonial times to encourage people to attend church on Sundays and holidays. State legislators in Connecticut and New Jersey have also discussed passing blue laws that would set times when shops could open on “Turkey Day”.

“It’s a day when you hang out with your family, go play touch football, have a big turkey dinner and complain about your crazy uncle or cousin, but you don’t think about super blockbuster sales at Target,” he told the Mother Jones news website.

Companies such as Costco, TJ Maxx and GameStop have resisted the rising commercial temptation to open on Thanksgiving and hope that the decision will bring thanks and business from shoppers.

“For us it’s a matter of principle,” GameStop president Tony Bartel told the New York Times. “We have a phrase around here that we use a lot — it’s called ‘protecting the family’. We want our associates to enjoy their complete holidays,” he added (using that ubiquitous and hideous corporate euphemism for “employees”).

The sales don’t just end on Thanksgiving week but extend into the following week. Cyber Monday, the first working day after the Thanksgiving weekend, is the busiest day for online shopping when workers are back at their desk computers and still looking for deals.

To counter-balance the crazed shopping holiday period, there is a push by the charity movement to make the following day “Giving Tuesday” when people are encouraged to give something back.

And all this happens still with 23 shopping days to go to Christmas.