‘I’m no longer afraid,’ says Chelan Lasha. ‘I feel more powerful than him’ 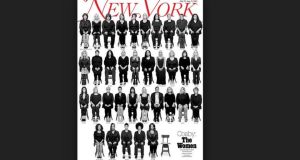 Thirty-five of Bill Cosby’s accusers appear on the cover of New York magazine this week as part of an expansive feature on the sexual assault allegations against the 78-year-old comedian.

Thirty-five of Bill Cosby’s accusers appear on the cover of New York magazine this week as part of an expansive feature on the sexual assault allegations against the 78-year-old comedian.

“I’m no longer afraid,” Chelan Lasha, who claimed Cosby assaulted her when she was 17, told the magazine. “I feel more powerful than him.”

Over the last year, the reports about Cosby’s alleged sexual assaults have been ongoing.

According to the magazine: “The group of women Cosby allegedly assaulted functions almost as a longitudinal study - both for how an individual woman, on her own, deals with such trauma over the decades and for how the culture at large has grappled with rape over the same time period.

“In the ‘60s, when the first alleged assault by Cosby occurred, rape was considered to be something violent committed by a stranger … But among younger women, and particularly online, there is a strong sense now that speaking up is the only thing to do, that a woman claiming her own victimhood is more powerful than any other weapon in the fight against rape.”

The cover comes one week after a deposition of Cosby taken during a sexual assault lawsuit from 2005 was published by the New York Times, revealing how he used sedative drugs in his sexual pursuit of young women.

So far, 46 women have come forward to accuse Bill Cosby of sexual assault, in some cases, according to a recently unsealed deposition, with the aid of quaaludes—a powerful sedative that can render a person functionally immobile. But these allegations are by no means new, with some stretching back decades—to a time when the culture of rape in America left victims little recourse but to suffer silently, and in shame. Today, the way we think and talk about rape has evolved, creating a safer space for survivors to feel empowered by speaking up and reclaiming their victimhood. And that’s led us here. Of the 46 women who have come forward to accuse Cosby, we spoke to 35 of them — “a sorrowful sisterhood” of women united by their dark experiences, steadfast in their resolve to remain silent no more. Read more: nymag.com/cosby-women. 📷: Amanda Demme

In the court documents, Cosby admitted to giving the plaintiff, Andrea Constand, one and a half tablets of Benadryl to relieve stress.

According to Cosby, the sexual contact they had was consensual.

“She doesn’t walk out with an attitude of a huff, because I think I’m a pretty decent reader of people and their emotions in these romantic sexual things, whatever you want to call them.”

Ms Constand, a former college basketball player and Temple University administrator, claimed Cosby drugged and raped her at his Pennsylvania home, is not featured.

Her civil suit against the comedian led to the deposition.

The magazine’s website is currently offline with speculation on social media suggesting it is as a result of increased trafic to the site.

In total, more than 40 women have come forward to accuse Cosby of sexual assault.