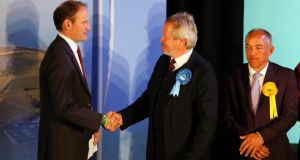 The UK Independence Party has trounced the Conservatives in one byelection and run Labour to just over 600 votes in another once-safe seat, in results declared early today.

The results mark a triumph for the Eurosceptic Ukip and creates the possibility that neither the Conservatives nor Labour will command a Commons majority after May - even with the Liberal Democrats.

In Clacton-on-Sea, former Conservative MP Douglas Carswell - who defected to Ukip in August - received 21,113 votes, nearly two and a half times the number won by the Conservative candidate, Giles Watling, who got 8,709.

Carswell took 60 per cent of the votes cast in the seaside town - the second biggest-ever swing that has taken place in a British byelection - in a constituency where Ukip did not even field a candidate as recently as 2010.

In Heywood and Middleton, which lies between Manchester and Rochdale, Ukip’s John Bickley was just 627 votes behind Labour’s Liz McInnes when the result was declared shortly before 2am.

The victory in Clacton had been expected, given Carswell’s popularity in the Essex constituency, but the scale of his victory was higher even than many in his new party had dared to hoped.

In his victory acceptance speech, Carswell, who was born and educated in Africa, urged Ukip to represent all generations, creeds and nationalities in the United Kingdom.

However, the performance in Heywood and Middleton, near Manchester, may be the most significant, if it means Ukip can mount credible challenges to Labour in the north of England.

Labour began the Heywood campaign deeply worried by the threat from Ukip, but calmed as the short campaign went on believing that its core vote would be enough.

However, the faces of Labour figures, including MP Toby Perkins, became progressively more drawn as the count went past midnight amid signals that the numbers were worse than they had anticipated.

Anecdotally, there is evidence that blue-collar voters concerned about the European Union, immigration, crime and a dislike of party leader Ed Miliband deserted the party.

Labour won a larger share of the vote last night, though just 36 per cent of locals bothered to cast a ballot, but this occurred on the back of a collapse in the Liberal Democrat support.

Speaking after her victory, Liz McInnes provoked guffaws from Ukip supporters when she claimed that voters had given “their backing for Ed Miliband’s plans for the National Health Service”.

If voting practices in Heywood are repeated elsewhere next May, Labour can hope that a haemorrhage of support from the Liberal Democrats could safeguard otherwise vulnerable seats.

Despite Ukip’s declarations that “the dam has burst”, elections analyst Prof John Curtice said Heywood and Middleton showed that Ukip can come “a very good second”, but winning is another matter.

“It is a demonstration of just how difficult it is at the end of the day to win anything but the most marginal of Labour constituencies,” he told the BBC early today.

However, Ukip’s candidate John Bickley triumphantly declared that Heywood is proof “that there are no safe seats anymore for Labour anywhere in the north of England”.

Up to recently, few gave Ukip any realistic hope of winning Commons seats next year because smaller parties traditionally struggle under the UK’s first-past-the-post voting rules.

Now, however, pollsters YouGov, for example, believe the party could win 10 - including Nigel Farage in Thanet South, Diane James in Eastleigh, along with a half a dozen between the Humber and the English Channel.

Substantial gains for the Scottish National Party from Labour could, if it happens, leave both Labour and the Conservatives with roughly equal numbers of MPs.

In such a situation, the addition of the Liberal Democrats’ reduced stock of MPs would not be enough for either party to command a Commons majority - or, at least, one that could expect to last five years.

The UK would then face a repeat of 1960/70s-style minority governments, or the creation of a multi-party coalition.

The Liberal Democrats had ruled out any hope of a decent performance in Heywood from the beginning, but it did win more than one in five votes in the May 2010 election.

Even more significantly, Heywood and Middleton includes large swathes of Rochdale Borough Council, which the Liberal Democrats controlled as recently as 2009.

Though voters are still eight months away from the 2015 general election, there are increasing signals that the Conservatives and Labour could return with roughly similar numbers of seats.

The Liberal Democrats, all are agreed, will suffer serious losses: the party itself believes it can hold approximately 35 of the 56 Commons places it currently has.

However, it could be far worse if the tide completely goes out for Nick Clegg, who publicly accepted this week that many voters had lost trust in him.

The next question centres on when the Rochester and Strood by-election - caused by the defection of Conservative MP Mark Reckless to Ukip late last month - will be called.

Under the Commons traditions, the Conservatives should set the byelection date, but Ukip chairman Steve Crowther early today pondered the possibility that Carswell could be the one to move the motion.

Following Reckless’s defection, the Conservatives launched an all-out assault on him, where he was publicly called a liar by leading Conservatives including prime minister David Cameron.

The force of the assault was based upon a belief that it could defeat him in the byelection, though Ukip out-polled the Tories by two to one in the constituency in the European Parliament elections in May.