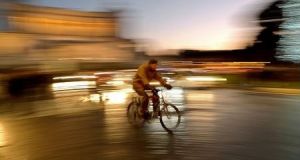 West Midlands Police force is thought to be the first force in Britain to proactively target motorists who flout laws requiring them to give cyclists at least the same space as they would vehicles when overtaking. File photograph: Getty Images

Police in Britain are to use plain clothes officers riding bikes to identify and catch “close-pass” drivers who endanger cyclists.

West Midlands Police force is thought to be the first in the country to proactively target motorists who flout laws requiring them to give cyclists at least the same space as they would vehicles when overtaking.

Anyone encroaching inside a safe passing distance “widely considered to be a minimum of 1.5 metres” runs the risk of being prosecuted for driving without due care and attention.

The new operation will see officers in plain clothes saddle up on some of Birmingham’s busiest routes.

Under the initiative - which was trialled over four days last month - police cyclists radio through details of “close-pass” drivers for colleagues in cars to intercept at a designated holding point.

Drivers will be offered road-side educational input on safe overtaking, but repeat offenders - or anyone deemed to have driven dangerously close to a cyclist - could be prosecuted.

West Midlands Police traffic officer and cyclist PC Mark Hodson said: “As a police force we must do our utmost to protect vulnerable road users and show that anyone who puts them in danger through poor driving will be dealt with.

“Cyclists may suddenly need to avoid uneven road surfaces or obstacles like drain covers, so it’s important to afford them plenty of room when overtaking.

“We know that close passing is the single biggest deterrent stopping more people from taking to their bikes.

“Drivers need to consider that a cyclist they are overtaking could be a police officer - and if they don’t pass them safely they could be prosecuted.”

David Cox, chairman of trustees at charity UK Cycling, said: “We are delighted that West Midlands Police is to actively target close-pass drivers.

“The outcome will mean greater safety for everyone who cycles or would like to use a cycle for everyday trips.”

Life under Level 4: What will be closed under tighter restrictions?