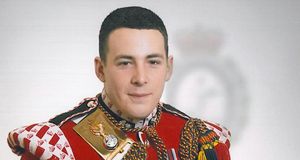 Two men have denied the murder of British soldier Lee Rigby on a street in Woolwich, London, in May of this year. Photograph: British Ministry of Defence/PA Wire

Two men have denied the murder of a British soldier on a street in Woolwich, London, in May of this year.

The widow of soldier Lee Rigby broke down in tears in court as Michael Adebolajo (28), and Michael Adebowale (22), denied his murder.

Rebecca Rigby watched tearfully as the two appeared at the Old Bailey via videolink.

Both wearing red T-shirts and pale trousers, they appeared from separate rooms for today’s hearing.

The pair were remanded in custody to face trial at the Old Bailey on November 18th.