Sturgeon says SNP election focus must be on health, education 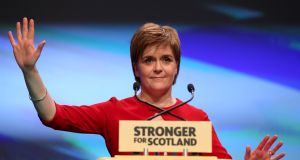 She repeated that there would be no new referendum until there was clear evidence that a majority favoured independence, suggesting that the best way for the SNP to persuade last year’s No voters to change their minds was to perform well in government. The delegates appeared content with that strategy but it was striking that the first time they came to their feet during Sturgeon’s speech was when she reaffirmed her determination to win independence for Scotland.

The SNP’s 114,000 members constitute about 2 per cent of Scotland’s population, the equivalent of a UK-wide party boasting a million members. Three out of four joined in the past year, most of them immediately after last year’s referendum. According to party activists, the new members come from all backgrounds and political traditions but are overwhelmingly motivated by the national question.

“They’re impatient but they’re not stupid,” one SNP councillor told me. “They don’t expect a referendum in the next year but if it doesn’t happen in the next five years they could boil over.”

“The choice at any election is about more than individual policies. It’s about who you trust most – as your government and your First Minister – to provide the experience, the leadership, the ambition, the character and the unity of purpose to lead this country forward with confidence,” she said on Saturday.

“To the people of Scotland I ask this. Trust us – trust me – to always do the best for you, for your family and for your community. And trust the SNP to always be stronger for Scotland.”

If the SNP looked invincible in Aberdeen, it is not least because its rivals for power in Scotland look so weak. The Liberal Democrats, once a party of government in Scotland, have all but disappeared; the Conservatives remain deeply suspect for most Scots; and Scottish Labour shows no sign of recovering from the disaster of May’s general election, when the once dominant party lost all but one of its Scottish seats at Westminster.

What the SNP’s rivals have in common is their failure to grasp the full scale of Scotland’s political transformation, and particularly the fact the SNP now firmly occupies the centre ground of Scottish politics. Sturgeon and her party will have to deal with potentially divisive issues in the coming months, notably abortion and land reform. But they are confident that, by depicting Jeremy Corbyn’s Labour Party as chaotic and David Cameron’s Conservatives as callous, the SNP can successfully present itself as the only party effectively representing Scotland’s interests.

“For more and more people in Scotland, Labour’s inability to mount a credible challenge for government will bring into sharp focus this fundamental truth,” she said

“The only real and lasting alternative to Tory governments that we don’t vote for is independence for our country.”

And that is precisely what her members wanted to hear.