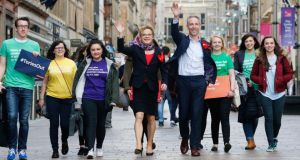 Comedian Eddie Izzard and Scottish Labour leader Jim Murphy on the British general election campaign trail in Glasgow on Monday. Many Catholics in Scotland have stuck by Labour in the face of the nationalists’ surge, but some are disillusioned over the party’s stance on independence. Photograph: Danny Lawson/PA 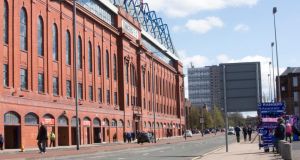 Ibrox Stadium in Glasgow, home of Rangers. Many in traditional Rangers heartlands voted Yes in the independence referendum, while many Celtic fans have traditionally been at odds with aspects of Scottish nationalism. Photograph: Jeff Holmes/PA Wire.

Two stadiums, two radically different views of the upheaval in Scottish politics. Parkhead and Ibrox are just a few kilometres apart, but in the heartlands of Celtic and Rangers, Glasgow’s great football rivals, the prospect of a historic advance by the Scottish National Party splits opinion and undercuts old certainties.

At the Emerald Isle, a Celtic pub on Gallowgate – the main thoroughfare linking Parkhead to the city centre – a small group of men have gone inside to escape the downpour. Surrounded by framed Celtic jerseys and team posters taking up every inch of wall space, George Harkins remarks that politics in Glasgow’s East End have “well changed” since he and his family all voted for Labour as faithfully as they cheered for the green- and-white.

From behind the bar, where he has been idly reading a paper and listening to the conversation, James Melville joins in. “Labour are finished in Scotland, ” he declares. He used to be a Labour activist, and on previous election days he would help bring old people out to the polling station. This time he won’t even vote for the party.

Across town in Govan, the red-brick exterior of Ibrox Stadium looms over the old shipyards on the Clyde River. Union flags flutter from some of the local pubs. In the District Bar on Paisley Road West, manager David Curry believes it would be “terrible” if the SNP won a landslide in Scotland. “They’ve done nothing for economic growth in this country,” he says, dismissing party leader Nicolas Sturgeon as “Alex Salmond with frilly knickers on”.

Curry says his business has been hit hard by the economic downturn and new laws on drink-driving, and the last thing Scotland needs is a party that has “one sole agenda: independence at any cost”. The only silver lining he sees is that a huge victory for the SNP would expose its ineffectiveness. “People will wake up, because they’ll fail miserably.”

When the result of last September’s referendum was announced, raucous celebrations broke out in the District Bar. Curry says he was “over the moon” at the outcome, but he is concerned about how quickly the issue seems to have returned to the agenda. “They said it was once-in-a-lifetime but now they want to go again. That’s not democracy.” He believes “without a shadow of a doubt” that the referendum exacerbated tensions between Rangers and Celtic supporters.

“There’s a lot of resentment among the nationalists because they lost a democratic vote. Just let it go. It’s up and gone. Help your country.”

While it’s often assumed the referendum votes broke down along religious lines in working-class areas such as Gallowgate and Govan, the reality is more nuanced. Many in traditional Rangers heartlands voted Yes, just as many Catholics stuck by Labour in the face of the Scottish nationalists’ surge.

Many Celtic fans have traditionally been uncomfortable with aspects of Scottish nationalism, believing their links to Irish diaspora communities in Liverpool, Manchester or elsewhere – in addition to Ireland itself – to be as much a part of their identity as their Scottishness. In recent years, Celtic supporters’ groups have been at odds with the SNP over its enactment of a law aimed at curbing sectarianism in football. The law, which was opposed by Labour, the Liberal Democrats and some rights organisations, is seen by some Celtic fans as overly restricting the expression of a minority Irish republican identity.

Back on Gallowgate, meanwhile, old allegiances run deep. Sixty-nine year-old Jim Ward, a home-and-away Celtic supporter who describes the club as “my life”, says this will be the first time he has chosen not to vote in an election. A lifelong Labour supporter and a Yes voter last year, he felt “cheated” when the party “sided with the Tories” by campaigning for a No. “Labour used to be socialist but they closed the door on all that. They’re after a different class of people now,” he says.

Yet he cannot quite bring himself to vote SNP. That, he says, is a line he cannot cross. So abstaining is the only decision he can live with. “My family has always been socialist and Labour. I’ve been proud to carry on that tradition – until now.”