Posh Edinburgh cricket types spell out a resounding No

Supporters of a No vote gathered yesterday on a cricket pitch 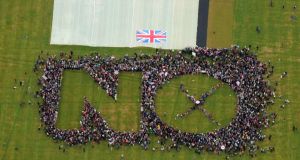 Voters concerned in “the face of a robust Yes campaign”.

Founded in 1832, the Grange cricket club in Edinburgh’s leafy Stockbridge district is a place where on a Sunday afternoon one can hope for the comforting twack of a cricket bat.

Yesterday, it was home to several thousand people hoping for a No vote in Thursday’s independence referendum, but increasingly worried that one will not come about.

“I think the No campaign was too complacent, until they saw the opinion poll showing that the Yes side had built up steam,” Kirsteen Steel told The Irish Times.

“I think I have been too complacent, too,” she said, saying she travelled from Annan in Dumfriesshire to show her support for a No vote at yesterday’s event.

“But it is rather posh, isn’t it,” she said. And she was right, even to the point where the event became a gentle caricature of itself, with Sophias saying “Hello, dahling,” to Henrys and Freddies.

However, there is no doubt about the genuineness of the concern now being displayed by people who regard themselves as Scottish, but British, too.

Felicity Kane, “a single mum of two and not political”, said she had organised yesterday’s event because not enough has been done to mobilise No voters. She had planned to have the crowd atop Arthur’s Seat, one of the hills at the back of Holyrood, but Historic Scotland [the agency charged with safeguarding historic monuments] had, she said, vetoed her plans at the last minute. And she was not happy about it.

Dutch-born Oscar Van Nieuwenhuizen, an antiques dealer, had travelled into Edinburgh, too for the event, recognising some of those present as his neighbours in Dumfriesshire.

Some of them were major landowners, certainly, but it was their work which had made Scotland “so beautiful and so perfect”, something that would disappear without them.

Welcoming the event, Campbell said No supporters have too often found it difficult to state their preferences openly in “the face of a robust Yes campaign”.

For Kirsteen Steel, the week ahead will be difficult. “I think Thursday is going to be like watching a horror film from behind a sofa, scared about what happen next.

“I know you have to take risks in life, but this is just too much, too humongous. I intend to be with some friends that night, and try and distract myself,” she said.