Norman Lamb to run for leadership of Liberal Democrats 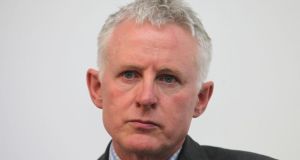 UK MP Norman Lamb, who has confirmed he is to stand for the leadership of the Liberal Democrats following Nick Clegg’s resignation. Photograph: Katie Collins/PA Wire

Norman Lamb has confirmed he will be standing for the leadership of the Liberal Democrats after being widely tipped as a frontrunner to replace Nick Clegg.

Mr Lamb - who became MP for North Norfolk in 2001 and was health and social care minister in the recent coalition government - described the role as a “monumental task”.

The 57-year-old is the first to declare his bid in a race expected to be dominated by him and former party president Tim Farron.

Mr Farron, who has been urged to run by the leaders of the Scottish and Welsh Lib Dems, Willie Rennie and Kirsty Williams, has said that he will decide in the coming days whether to throw his hat into the ring.

Just eight Lib Dem MPs remain in the House of Commons after huge losses during the general election last week, which saw most of their one-time coalition cabinet members, including Vince Cable and Danny Alexander, toppled.

Mr Clegg immediately announced his resignation as the scale of the disaster became clear.

Speaking to ITV Anglia, Mr Lamb said: “I think we’ve got a lot of learning to do and we’ve got to understand where we went wrong.

“I think we did a lot of good things in government that we should be very proud of - cutting tax for people on low pay, money we invested in children from poorer backgrounds and their schools - these are really important things that will make a big difference in time, but we didn’t communicate that very well.

“I suspect in the next five years, with the Conservatives on their own, people might start to see what a good restraining influence we were and also some of the very progressive policies that we actually achieved in government.”

Watford-born former employment lawyer Mr Lamb, who first stood for election in North Norfolk in 1992, held his seat last Thursday with a majority of 4,043, down from 11,626 in 2010.

Afterwards, he said he was “grateful” for the faith his constituents had shown in him but conceded it was a “bruising night” for the party.

Nominations for the Lib Dem leadership open on Wednesday. To get on the ballot a contender must secure the endorsement of 10 per cent of MPs - which now stands at less than one member of parliament - as well as 200 members from at least 20 local Liberal Democrat parties.

The wider membership then elects the winner via an alternative vote system, with the verdict due on July 16th.

Meanwhile, prominent Liberal Democrat Paddy Ashdown has claimed his party was “killed” by the inaccuracy of the pre-election opinion polls.

Having said that he would “eat my hat” after learning that a shock exit poll predicted a significant Conservative victory, the party’s former leader admitted he had been “blindsided” by the result.

The pollsters are facing an independent inquiry by the British Polling Council after almost every election poll during the campaign underestimated the Tories’ lead over Labour.

In an interview with The Guardian, Lord Ashdown said he thought the victory was an “unexpected success” for David Cameron’s party as much as it was an “unexpected disaster” for the Liberal Democrats, although the polls had forecast heavy losses for the party.

He also said the success of the SNP was “the creation” of Mr Cameron and said he felt “the union was more at risk than at any moment in the last three centuries”.

Mr Ashdown was presented with an edible hat on BBC’s Question Time following the election results.