Justice secretary says Britain will not follow Norway or Canada, or rely on WTO rules 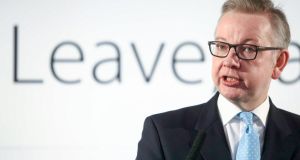 A British vote to leave the European Union could prompt other member states to follow suit, ushering in “the democratic liberation of a whole continent”, the leader of the Leave campaign has suggested.

Justice secretary Michael Gove, who heads Vote Leave, said Britain’s success outside the EU would enrage and disorientate “EU elites” but would send a different message to the people. “They will see that a different Europe is possible. It is possible to regain democratic control of your own country and currency, to trade and co-operate with other EU nations without surrendering fundamental sovereignty to a remote and unelected bureaucracy. And, by following that path, your people are richer, your influence for good greater, your future brighter,” he said.

Mr Gove accused the Remain side of running an overwhelmingly negative and pessimistic campaign, portraying Britain as “beaten and broken” and treating voters like children who are easily scared and unfit to be trusted. In the first major speech by a leading Leave campaigner since the start of the official campaign last week, Mr Gove poured scorn on the Remain side’s warnings about the negative consequences of leaving the EU.

Dismissing this week’s treasury report analysing the cost to Britain’s economy of the most commonly cited alternatives to EU membership, Mr Gove said Britain would not follow the path of Norway or Canada. Nor would it rely on World Trade Organisation (WTO) rules to regulate its trade with the EU.

“There is a free trade zone stretching from Iceland to Turkey that all European nations have access to, regardless of whether they are in or out of the euro or EU. After we vote to leave we will remain in this zone. The suggestion that Bosnia, Serbia, Albania and the Ukraine would remain part of this free trade area – and Britain would be on the outside with just Belarus – is as credible as Jean-Claude Juncker joining Ukip,” he said.

Nor would it offer Britain the protection from non-tariff barriers offered by membership of the EU or, as in the case of Norway, the European Economic Area (EEA).

Appearing before the House of Lords economic affairs committee yesterday, Bank of England governor Mark Carney said a vote to leave the EU might result in an extended period of uncertainty about Britain’s economic outlook, pushing down demand in the short run.

“Uncertainty regarding the supply side of the economy might also increase, reflecting any alterations to product or labour market regulation, adjustments in labour flows or changes in the rate of technology adoption as a result of different arrangements governing foreign trade and capital flows,” he said.

“A vote to leave could also have significant implications for asset prices. In addition to affecting the exchange rate, a rise in uncertainty could weigh on other asset prices, tightening financial conditions. Rising risk premia, all else being equal, would depress activity.”