London Letter: Irish disenfranchised at home but may vote on Brexit 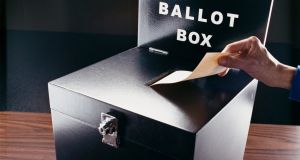 Hundreds of thousands of Irish people living in Britain will be eligible to vote in the EU referendum on June 23rd, making us the envy of our continental European counterparts. But these same Irish citizens are not allowed to participate in Irish referendums and had no vote in last month’s general election.

The prohibition is unusual, with 120 countries allowing their citizens abroad to vote, and almost unique in the European Union. Only Greece and Malta prevent expatriates from voting, although Malta subsidises overseas citizens who want to go home to vote.

For years, groups such as the Votes for Irish Citizens Abroad campaign have lobbied for an extension of the franchise and the Constitutional Convention recommended in 2013 that Irish citizens abroad should be allowed to vote in Irish elections.

There is one Irish parliamentary election that does allow overseas voting – the choice of the six senators representing the two university panels. Not only are graduates of Dublin University and the National University of Ireland (NUI) living abroad allowed to vote, they are allowed to stand for the Seanad seats.

Barry Johnston (30) from Ballinasloe, Co Galway, who works for the charity Action Aid in London, has decided to do just that, running in the NUI panel on a platform to extend votes to Irish citizens abroad. Ed Davitt, a lobbyist for environmental causes in Brussels, is running on the same platform in the Trinity panel.

Johnston says the idea of running for office was hatched during last year’s marriage equality referendum, when many young Irish emigrants travelled home to vote. He acknowledges the strong resistance in the past to allowing groups living abroad to influence Irish elections but he believes the mood has shifted in recent years.

“So there’s a greater clamour and a greater demand for it. And I think technology now would allow it to happen much more easily and as we can see in other countries, the trend towards a recognition that your citizens are global and not tying the vote to residency is one that’s pretty much mainstream in other democracies.”

He reckons that a candidate in the NUI panel needs between 3,000 and 4,000 votes to have a chance at winning a seat, and admits that winning such support is a big challenge for a first-timer. He is hoping for the support of many of the estimated 2500 NUI graduates overseas who are registered to vote, along with the votes of younger graduates.

If he does win a seat in the Seanad, Johnston has no plans to move to Dublin full-time, preferring to be a “commuting senator” who works in Dublin during the week and lives in London at weekends.

“I think the commute between London and Dublin is a quicker and a cheaper one than it is from certain parts of Ireland by public transport,” he said.

“Also, a very common feature of Irish emigration now is what I call weekday emigrants – people who get up in a rural Irish town at God knows what hour on a Monday morning, commute to the UK, spend five days there working and get back in on a Friday. To have one member of the parliament doing the same in the other direction is not a bad thing, I think.”