Kathryn Smith jailed for life for stamping daughter to death 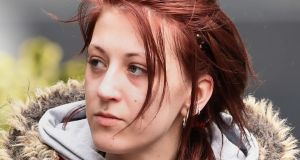 A mother has been jailed for life with a minimum term of 24 years after being found guilty of murdering her toddler daughter Ayeeshia Jane Smith by stamping the child to death.

Kathryn Smith (23), was convicted by majority verdict at Birmingham Crown Court on Friday after a six-week trial of her and ex-partner Matthew Rigby (22).

Rigby was convicted of causing or allowing little Ayeeshia’s death at the family home in Burton-upon-Trent in Staffordshire on May 1, 2014, but cleared of her murder. He has been jailed for three months and six years.

Smith wept constantly as she was sentenced by Mrs Justice Geraldine Andrews.

Rigby, who closed his eyes tight as he was asked to stand in the dock by Mrs Justice Andrews, was jailed for three years and six months for what she called his “failure to act”.

Jailing Smith, the judge said: “You are a devious, manipulative, selfish, young woman who would stop at nothing to get your own way.

“To that end you were prepared to tell lie after lie.

“Ayeeshia was a particularly vulnerable victim, thin and slight of frame, deserving of protection and under the protection of social services for the whole of her short life.

“She was killed in her own home by her own mother - that is the grossest breach of trust.”

As Smith, wearing a grey sweater hoodie and with her dyed red hair pulled up in a ponytail, gazed through eyes full of tears, the judge told her Ayeeshia had come “a poor second” during her brief life.

“She was a defenceless child, thin and fragile for her age and it was your responsibility as mother to take care of her and protect her from harm, yet on the afternoon of May 1, 2014, for no apparent reason, her life was brutally snuffed out in a vicious beating in her own bedroom, surrounded by her toys and playthings.” Addressing Smith, she added: “It was you who remained your number one priority and Ayeeshia came a very poor second.”

The judge said whatever had triggered the attack in the little girl’s last moments of life was a mystery because of Smith’s “wall of silence”, which had robbed her natural father Ricky Booth and other loved ones of vital answers leading to the child’s eventual fate.

She told the young woman: “The picture you wished to paint of yourself of the down-trodden subservient mother is far from the truth.”

Concluding her remarks to Smith, the judge said: “Neither immaturity or lack of intelligence was a significant factor in the commission of these offences. “Just a case of venting your anger on a defenceless child.”

Addressing Rigby, she accepted he had become “a doting father substitute” to 21-month-old Ayeeshia, but had failed to stop Smith’s violent outbursts on the tot, who had by the time of her death suffered a catalogue injuries, both old and new.

“You knew of risk of serious violence to Ayeeshia but chose to do nothing about it,” the judge said. “ Your failure to act when you could and should have done is something you’ll have to live with for the rest of your life.”