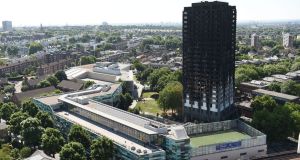 Survivors of the Grenfell Tower fire were “deceived” over how long it would take to rehouse them, a charity head has said, as it emerged around a hundred households will still be in hotels at Christmas. Photograph: David Mirzoeff/PA Wire

Survivors of the Grenfell Tower fire were “deceived” by promises to swiftly rehouse them, a charity boss has said.

Approximately 100 households will still be living in hotels on Christmas Day, six months after the tragedy in west London.

Mark Simms, director of the Rugby Portobello Trust, which has been distributing grants to the community in the London borough of Kensington and Chelsea, said a lack of honesty throughout the process had added to survivors’ stress.

The prime minister, Theresa May, initially said she hoped to rehouse everyone within three weeks of the fire, while the communities secretary, Sajid Javid, later told MPs the local council was aiming for a Christmas deadline. The leader of the council, Elizabeth Campbell, said she was “absolutely” hoping to have everyone in homes within a year.

Simms said promises to rehouse survivors within three weeks had been “ill-timed, ill-conceived and ill-judged”. He added that the response from volunteers after the fire had been “the one bit that didn’t fail”.

Tiago Alves, who escaped with his family from their 13th-floor flat in Grenfell Tower, said it was crucial for people to be rehoused as soon as possible, so they could begin prioritising their mental health and the focus could be fully on the public inquiry and criminal investigation.

Forty-nine households have moved into permanent homes, while 57 are in temporary accommodation.

But some 101 households, including 17 families with 34 children, remain in hotels, according to Kensington and Chelsea council, which said it had been honest from the outset regarding rehousing pledges.

The council said its sole promise had been to secure 300 homes by Christmas, and that every household had received an offer of accommodation. However, local legal and campaigning groups have said that many of these offers have been either outside the borough, unsuitable or in other tower blocks.

“We’ve got people that we want to give grant money to, and they can’t take it because it’s wrapped up in such a tragedy that they feel like it’s blood money.

“That’s the level of trauma associated with people getting out of that tower, so to expect people to behave rationally when they’ve got to go online and book for a property is a bit daft.”

Simms added: “It needs to be a much more personal, honest relationship with somebody who can navigate you through. And they’ve been slow to get that.” – Guardian