Out of political office for more than 20 years, Jim Sillars remains an influential voice 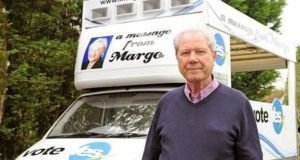 Jim Sillars: “This is the first time in 300 years that we have the chance of becoming independent, and this is the only chance.”

Standing in the back of a repainted ice-cream van in a Maryhill estate in Glasgow yesterday, Jim Sillars, microphone in hand, apologises for waking anyone who had gone to bed after a nightshift.

“I know what nightshift is all about, I did them myself – on the railways, in the fire brigade,” says the 76-year-old Sillars, a former deputy leader of the Scottish National Party.

“I apologise if I have woken you up,” he goes on, “but this is the first time in 300 years that we have the chance of becoming independent, and this is the only chance.”

Maryhill at 10am is quiet. One or two locals peer from kitchen windows in the refurbished high-rise flat complexes that once were some of Europe’s worst local authority housing. Few gather around the van.

Sillars’s transport is named “The MargoMobile” in honour of his late wife, Margo MacDonald, a much-loved politician whose memorial service in April united the deeply bitter world of Scottish politics.

So far, he has held 60 meetings: “In Troon, we had so many people that the chairman asked the definite Yes voters to give up their seats for the ‘don’t knows’,” Sillars says.

Independence has been a lifetime ambition. In the 1970s, Sillars held a seat for Labour in the House of Commons, but he quit because it did not set up a Scottish Assembly.

In the late 1980s, Sillars, who by then had joined the Scottish National Party, became an MP again, this time for Govan, after he beat Labour in a bitter byelection – one of the SNP’s most famous victories.

Sitting on a damp wall, Sillars is definite in his view: the opinion polls which predict that the independence campaign will be defeated are wrong.

“Believe me, I remember elections in the past. In 1970, Labour had a consistent lead of 12 per cent for all of the campaign, but we got beaten on the Thursday of voting.

Once upon a time, Sillars and the SNP leader, Scottish First Minister Alex Salmond, were close, though the two fell out when Salmond first ran for and won the SNP leadership in 1990.

The relationship will have cooled further this week following Sillars’s criticism of Salmond in the wake of the latter’s television debate last week with Labour’s Alistair Darling.

Salmond should have said from the beginning that an independent Scotland would set up its own currency, one that would track sterling in the beginning, but then make its own way. Instead, Sillars believes Salmond has been too cautious, by promising that Scots will be able to use sterling after voting Yes, only then to lose credibility when he has not been able to guarantee it.

“If three other parties are prepared to say that they will fight the next general election pledging that they won’t have currency union, then you have to accept that they have boxed themselves in,” he goes on.

Scots are faced with a simple choice, Sillars believes. A rejection of independence on September 18th means the option is gone, and it will not come back.

Few politicians are remembered for a single phrase, but Sillars is. In 1992, just minutes after he had had lost his Commons seats, he scathingly described Scots “as 90-minute patriots”.

Today, however, he believes that Scots will take the hard choices if they are clearly put before them: “Alex is trying to give soft choices, believing that he couldn’t frighten the horses.

“But he has frightened the horses. My criticism of the official Yes campaign is that they have been far too cautious – promising ‘change, no change’.

“I find that a lot of working-class people will vote Yes, but only because they want change. They want as much of it as they can get,” he says.