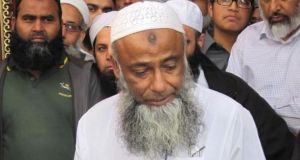 Dr Muhammad Taufiq al-Sattar whose wife and their three children died when a fire engulfed their home in September 2013. Photograph: Matthew Cooper/PA Wire 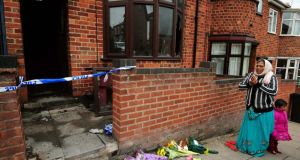 A local resident says a prayer outside the scene of the fatal house fire in Wood Hill, Leicester last year. Photograph: PA

The family of a Dublin-based neurosurgeon died in a petrol fuelled blaze in their home when they were mistakenly targeted in a revenge attack following the fatal stabbing of a fitness coach,a court has heard.

Dr Taufig al Sattar was working in Ireland at the time.

Opening the Crown’s case against the eight defendants in their trial at Nottingham Crown Court yesterday, prosecutor Richard Latham QC told the jury the fire was a “retribution process” for the fatal stabbing of their friend, Antoin Akpom, hours earlier.

Mr Latham told the jury the Taufiq family had no connection to the incident involving Mr Akpom or the eight defendants.

The court heard that Mr Akpom had been stabbed in the back in a “confrontation” involving two 19-year-olds, Hussain Hussain and Abdul Hakim, at around 5.30pm on September 12th,2013 less than a mile away in Kent Street.

He was pronounced dead in hospital at 7pm.

Hussain was jailed for life with a minimum term of 15 years for Mr Akpom’s murder following a trial at Stafford Crown Court earlier this month.

The jury was told that Hakim’s mother lived two doors down from the arson attack on the Taufiq family home.

Mr Latham said: “They simply got the wrong house — a tragedy.”