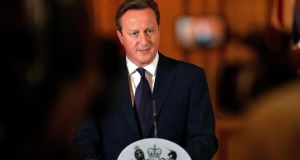 British prime minister David Cameron has promised to take whatever steps are necessary to defeat the “monsters” in the Islamic State jihadi group who released a video purporting to show the beheading of British aid worker David Haines.

Speaking after an emergency security meeting in London, Mr Cameron made no mention of recalling parliament, which is on its annual recess, or joining US air strikes against the extremist group which controls vast swaths of Iraq and Syria.

However, he said the UK could not ignore the threat posed by the Islamic State and Britain would have to take “action at home and abroad” through a sustained counter-terrorism strategy.

Cameron condemned the extremist group as the “embodiment of evil” and praised the 44-year-old Haines as a “British hero”.

“We are a peaceful people. We do not seek out confrontation, but we need to understand we cannot ignore this threat to our security and that to our allies. There is no option of keeping our heads down that would make us safe. The problem would merely get worse, as it has done over recent months, not just for us but for Europe and the rest of the world. We cannot just walk on by if we are to keep this country safe. We have to confront this menace,” said the British prime minister.

“Step by step, we must drive back, dismantle and ultimately destroy Isil [Islamic State] and what it stands for. We will do so in a calm and deliberate way, but with an iron determination. We will not do so on our own, but by working closely with our allies, not just the United States and in Europe, but also in the region because this organisation poses a massive threat to the entire Middle East.”

Listing five things the government will do, Mr Cameron said the UK would back the Iraqi government and arm the Kurds, work with the UN to mobilise against the Islamic State, support US air strikes, continue with humanitarian aid and protect UK citizens against terrorism at home.

His remarks did not appear to represent a change of strategy, but he appeared to have increased his rhetoric against the extremist group, keeping open the option of joining air strikes. UK Tornados are helping with surveillance and intelligence-gathering.

“This is not about British combat troops on the ground, it is about working with others to extinguish this terrorist threat. As this strategy intensifies, we are ready to take whatever steps are necessary to deal with this threat and keep our country safe,” said Mr Cameron.

The British prime minister is under pressure to join the US military action from some within his party, including former defence secretary Liam Fox. However, other Tory MPs are more reluctant to see Britain get caught up in war in Iraq once more.

Mr Cameron has said he would consult parliament before taking any military action, unless there was a need to take last-minute emergency action. But he is likely to need the support of Labour and the Liberal Democrats in order to avoid losing the vote, like he did last year when the government argued it should be prepared to join strikes against Syria.

The prime minister returned to his official residence in Downing Street, central London, late on Saturday night after releasing a statement just before midnight condemning the murder as an “act of pure evil”. He said the UK would do “everything in our power to hunt down these murderers and ensure they face justice, however long it takes”.

The US carried out at least nine air strikes last week, while the UK has pledged to help arm the Kurdish resistance forces in Iraq. These actions were both named in the video message, entitled “A Message to the Allies of America”, as reasons behind the killing of Haines.

The masked killer ended the video with a warning about a second British hostage, named in the international press and on social media as Alan Henning, a British aid worker. Haines, who had spent 12 years in the RAF, was captured as he worked for French aid agency Acted in 2013.

Before his death, he read a statement holding Mr Cameron directly responsible for his killing, while his murderer addressed the PM directly, saying Haines “has to pay the price for your promise”. – (Guardian service)