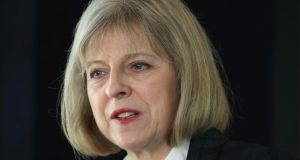 British home secretary Theresa May said she was preparing new laws to tackle Islamist militants in the UK and to stop them going abroad to fight. Photograph: PA

Britain has said it planned tougher laws to deal with British Islamist militants after Islamic State (IS) fighters in the Middle East released a video showing a suspected Briton beheading US journalist James Foley.

British Muslims and politicians have expressed horror at the apparent involvement of a Briton in the murder, which has fed concerns about the number of Islamist militants from Britain joining conflicts overseas and then returning home radicalised.

Authorities are trying to identify the man with a London accent who has been dubbed “Jihadi John” by media after sources said he was one of three Britons nicknamed the ‘Beatles’ who guarded hostages in Raqqa, the IS stronghold in eastern Syria.

Home secretary Theresa May said she was preparing new laws to tackle Islamist militants at home and to stop them going abroad to fight, adding that Britain faced a long struggle against a “deadly extremist ideology”.

“We will be engaged in this struggle for many years, probably decades. We must give ourselves all the legal powers we need to prevail,” May wrote in the Daily Telegraph newspaper.

While details are yet to be confirmed, Ms May said the new powers would be designed to restrict the militants’ behaviour, ban involvement in groups preaching violence and require prisons, broadcasters, schools and universities to take a greater role in combating the radicalisation of Muslims.

Ms May said at least 500 British citizens have travelled to fight in Syria and Iraq, where IS has seized large swathes of territory. Some of the fighters are aged as young as 16.

Britain has about 2.7 million Muslims in a total population of 63 million.

The rise of Islamist militants in Britain has been a growing concern since four Britons – two of whom had been to al Qaeda training camps in Pakistan – killed 52 people in suicide bomb attacks in London in July 2005.

The murder last year of an off-duty soldier, Lee Rigby, on a London street by two British Muslim converts exacerbated the concerns.

The government has already tightened up rules so it can confiscate the passports of people travelling abroad to join conflicts. So far 23 people have had their passports withdrawn.

Ms May also said 69 people had been arrested for offences in Britain relating to terrorism in Syria, with 12 charged and four prosecuted, while more than 150 people were refused entry to the United Kingdom because their behaviour was deemed unacceptable.

“We intend to strengthen the law further to make it a criminal offence to travel overseas to prepare and train for terrorism,” she said.

The planned new measures follow calls for more action to tackle the recruitment of Muslims in Britain to travel overseas to fight with militant groups.

But some politicians have warned any short-term measures seeking popular support could erode civil liberties and deepen the alienation felt by some young Muslims from British society.

“I greatly fear that we’re about to have a splurge of more laws that inhibit our freedom beyond that which is supportable,” Paddy Ashdown, a senior member of the Liberal Democrats, junior partner in Britain’s coalition government, said.

“What you need is a strategy for a war, not a series of measures to preserve internal security in Britain with more draconian legislation.”