The UK is unlikely to impose Border controls following vote to leave the EU, professor says 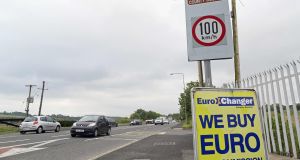 The Border between the Republic and Northern Ireland, in Co Donegal. File photograph: Paul Faith/AFP/Getty Images

The common travel area between the Republic and the UK is likely to remain post-Brexit, but the status of the Irish in the UK may need to be reviewed, according to a migration expert.

The primary reason for the durability of the common travel area between the two jurisdictions is the view of the UK authorities that it is impractical for the land Border to be an immigration frontier, according to Bernard Ryan, Professor of Migration Law at the University of Leicester.

Prof Ryan, a graduate of UCD who has studied the history of the immigration arrangements between Ireland and the UK, said one result of believing that the land Border could not be an immigration frontier has been unionist support for a common travel area.

This is because they would not like to see the UK impose controls on journeys between Northern Ireland and Britain, which is the only alternative if controls along the land Border are considered impractical. (Controls between the islands of Ireland and Britain were imposed from 1939 to 1952.)

The social and economic connections between the Republic and the UK are another reason for maintaining the common travel area, as is the free movement of labour that it has allowed for.

Prof Ryan said that studies in the archives he did some years ago when researching the common travel area convinced him it was the UK’s view that trying to impose an immigration frontier between the Republic and Northern Ireland was impractical.

This prevented a “more normal” arrangement being developed between the two jurisdictions in the period since 1920.

He said it was “amazing” that no effort was made to create an immigration frontier between Northern Ireland and the Republic during the Troubles.

The legal framework relating to the common travel area is different in the UK and the Republic.

Under Irish immigration law, everyone who is not an Irish or UK citizen is a “non-national”. Immigration controls apply automatically to all “non-nationals” who arrived from the UK by air or sea, and may be imposed on non-nationals who arrive by land.

Under UK law, immigration controls do not apply to persons arriving from the Republic of Ireland.

However, legally, Irish people are subject to UK immigration controls.

There has long been co-operation between the UK and the Republic on how immigration control works in practice, with the list of states that require visas to enter both jurisdictions being very similar.

In 2014 the Republic and the UK agreed a joint British-Irish visa that allows nationals of China and India to visit both states for up to three months, on the basis of a visa issued by either state. The arrangements between the two jurisdictions are reflected in three protocols annexed to the Treaty on the Functioning of the EU, one of which, protocol 20, allows the two jurisdictions to “continue to make arrangements between themselves relating to the movement of persons between their territories (the Common Travel Area)”.

Prof Ryan said that in the event of Brexit, the underlying reasons for the common travel area would continue to apply, with the position of Northern Ireland being an especially significant factor.

There is no obvious legal reason why the Republic could not retain the benefit of protocol 20, and maintain special arrangements outside of the Schengen zone.

A visa regime whereby EU citizens were able to enter the UK without visas for up to three months, post Brexit, would mean that there would be no need to end the common travel arrangement between the Republic and the UK, Prof Ryan said. On the rights of Irish citizens in the UK, Prof Ryan said that the Irish are not considered “foreign” in the UK, but the appropriateness of this status might have to be reviewed, post-Brexit.

Irish people have full political rights in the UK, and can acquire citizenship more easily than other EU citizens.

The status of the Irish as “non-foreign” under the UK’s 1949 Ireland Act might be reviewed post-Brexit, given that the Republic would still be in the EU.

Prof Ryan said he did not think there was great support for Irish people’s right to vote in the UK, and that any change might have implications for membership of the House of Commons and Lords as well.

In relation to immigration generally, Prof Ryan said the debate in the UK appeared to favour losing access to some parts of the EU’s single market, in return for getting greater control over immigration.