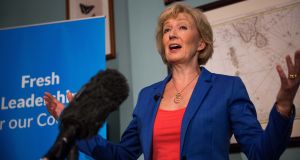 Andrea Leadsom has signalled she would begin the process for Britain’s exit from the EU in September, and that Britain would be out of the union by spring 2017. Photograph: Rob Stothard/Getty Images

Boris Johnson has given his backing to Andrea Leadsom in the Conservative party leadership contest.

Earlier the UK’s energy minister Ms Leadsom set out her vision for the leadership of the Conservative party, insisting EU nationals in Britain will not be “bargaining chips” but that freedom of movement will end.

Ms Leadsom, the previously little-known energy minister, is emerging as the most likely pro-Brexit candidate to challenge the frontrunner for the leadership, Theresa May.

A vocal leave campaigner, Ms Leadsom has signalled she would begin the process for Britain’s exit from the EU in September, and that Britain would be out of the union by spring 2017.

In her speech in Westminster on Monday, she called the referendum decision “a great moment in history … a historic opportunity of Europe as a whole and one of the biggest moments since the Berlin Wall came down”.

I will be supporting Andrea Leadsom for Conservative leader and our next Prime Minister, here's why: https://t.co/WebnLQzhcs

She said: “The result is final, it must be respected, and I will respect it. The UK will leave the European Union, freedom of movement will end, and the British parliament will decide how many people come to live here.”

Like her fellow leave campaigner and Tory leadership rival Michael Gove, Ms Leadsom said she would honour the pledge made in the campaign to spend “billions more” on the NHS, without giving a specific figure.

“The next prime minister must bring the nation together. The EU referendum didn’t cause divisions, but it certainly did reveal them.

The energy minister, who said in 2013 she believed in remaining in the EU, pledged to] continue George Osborne’s northern powerhouse plan for devolution, and that trade deals would be prioritised. Workers’ rights would be “protected and enhanced,” she said.

Unlike her main rival, Theresa May, Ms Leadsom said she was committed to giving EU citizens already living and working in the UK indefinite leave to remain. “I commit today guaranteeing rights of EU friends who have already come here to live and work. We must give them certainty, there is no way they will be bargaining chips in our negotiations,” she said.

She has previously refused to rule out a role for the outgoing Ukip leader, Nigel Farage, in the team that negotiates Britain’s exit from the EU.