Russia reacts angrily to fresh EU and US sanctions 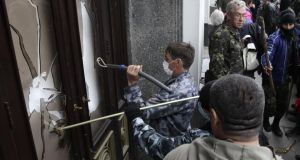 Russia reacted in anger to fresh sanctions imposed by the EU and US yesterday, as violence flared in the eastern Ukrainian town of Luhansk. Pro-Russian activists seized the headquarters of the regional administration in the town, hoisting a Russian flag on the roof.

This was the latest instance of insurgency rippling through towns in eastern Ukraine, since last month’s annexation of Crimea by Russia.

The European Union yesterday gave details of the specific individuals added to a list of sanctions on Monday, as anger grew towards Russia’s perceived failure to honour the agreement signed in Geneva on April 17th. Among the individuals targeted by the new sanctions are Russian deputy premier Dmitry Kozak, chief of staff of the armed forces Valery Gerasimov and head of the Russian military intelligence agency lieutenant general Igor Sergun, though the EU stopped short of following the lead of the US and extending the sanctions to companies.


Asset freezes
The addition of 15 new names to the EU’s sanction list brings to 48 the number of Russian individuals targeted by EU travel bans and asset freezes, with politicians and military figures comprising the bulk of senior figures targeted. On Monday the White House announced an expansion of its sanction list to include seven Russian government officials and 17 companies with links to Vladamir Putin.

Confirming the new EU sanctions yesterday, the EU’s foreign policy chief Catherine Ashton condemned “the downward spiral of violence and intimidation” in Ukraine. In particular, she denounced the detention of seven military observers from the OSCE, who remain in captivity, and the shooting of the mayor of Kharkiv on Monday, who remains in a serious condition. The issue of media freedom and the seizure of TV transmission towers were also sources of concern, she said.

Russian foreign minister Sergei Lavrov said Russia rejected the EU and US sanctions, describing them as “against all common sense.

“The attempts to blame others is the result of weak politicians or rather of those politicians who understand that their geopolitical ambitions have failed, and they are attempting to blame others,” Lavrov said on a trip to Cuba as part of a long-planned visit to Latin America.


Federation
Meanwhile, the Ukrainian parliament yesterday discussed the possibility of holding a national referendum on whether the country should remain one state or become a looser federation with more powers for regions, but no consensus was reached.

As negotiations continued to try and free seven OSCE mediators, the organisation said it planned to recruit hundreds more monitors for a planned civilian mission to Ukraine agreed last month. It is separate to the mission of unarmed military monitors sent to Kiev, eight of whom were seized last Friday. One Swedish officer was released, but four German, one Danish, one Polish and a Czech officials are being held by pro-Moscow separatists.

Russia’s stock market rose yesterday and the rouble strengthened as investors shrugged off the latest round of sanctions in what may be a sign of investor relief Russian banks and companies were not targeted by the EU.